Saif Ali Khan, Rani Mukerji, Siddhant Chaturvedi’s Bunty Aur Babli 2 is all set to hit theatres on November 19. Know everything about the film, before you watch it on the big screen. 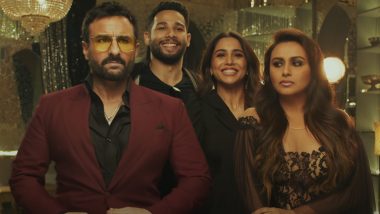 Saif Ali Khan, Rani Mukerji will be reprising their roles in Bunty Aur Babli 2 and it also stars the new Bunty Aur Babli jodi of Siddhant Chaturvedi and Sharvari Wagh. The film is an official sequel to Shaad Ali's 2005 film of the same name. The release date of the film was shifted multiple times due to the COVID-19 pandemic but as the theatres reopened in India after the second we saw Rohit Shetty's Sooryavanshi, Denis Villeneuve's Dune and Marvel's Eternals doing wonders at the Indian Box-Office. Bunty Aur Babli 2 Actress Sharvari Reveals She Grew Up Believing That She Was Meant to Be an Artist Because of Her Parents!.

Theatres in India are running at 50% capacity in some states while most of them are allowing audiences in full capacity. Bunty Aur Babli 2 can register a decent start at the box office considering the positive reviews that its trailer and songs. Just before you plan to watch Saif Ali Khan, Rani Mukerji, Siddhant Chaturvedi’s film in the cinema hall near you, here's everything you need to know about Bunty Aur Babli 2.

Two pairs of con artists are set to battle each other to prove which one is better. The new Bunty Aur Babli in town just framed the old con couple (Saif Ali Khan and Rani Mukerji), who are now finding ways to catch the imposters in town.

The music of Bunty Aur Babli 2 is composed by Shankar–Ehsaan–Loy while the lyrics are written by Amitabh Bhattacharya. Below is the film's audio jukebox.

Bunty Aur Babli 2 movie reviews are not out yet, LatestLY will update about it soon update about the film's review as soon as they are out. Till then, Stay tuned!

(The above story first appeared on LatestLY on Nov 15, 2021 04:34 PM IST. For more news and updates on politics, world, sports, entertainment and lifestyle, log on to our website latestly.com).