Did Taapsee Pannu Take a Dig at Kangana Ranaut by Joking about Varun Dhawan Not Mentioning Her Name While Hailing Saand ki Aankh Teaser? 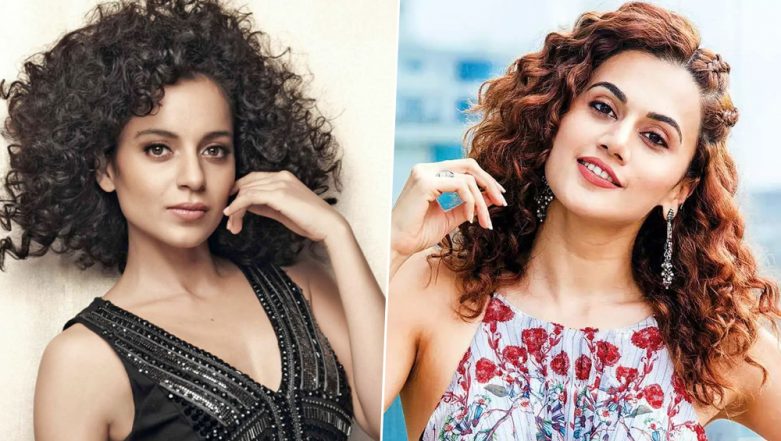 Taapsee Pannu can get really witty at times and she knows the art damn well. Remember the actress recently made headlines when Kangana Ranaut's sister, Rangoli Chandel targeted her for ignoring the Queen actress? It so happened that when Taapsee tried to praise Kangana's Judgemental Hai Kya trailer, she didn't mention the actress' name as such. And this irked the actress' sister very much. She did accuse the Badla actress of copying Kangana and never extending her support towards her. Guess Taapsee has her own way of answering such allegations. Rangoli Chandel Calls Taapsee Pannu a 'Sasti Copy' of Kangana Ranaut - Read Tweet.

Recently when Varun Dhawan praised the teaser of her next release, Saand ki Aankh, he didn't mention Taapsee and Bhumi Pednekar's name while hailing the content. The Game Over actress was quick to take a dig at Kangana or so it seems when she tweeted him back saying Arre Varun but u have not written our names  y no appreciation for us ??? Why why why?. Anurag Kashyap Slams Rangoli Chandel’s ‘Desperate’ Rant After She Calls Taapsee Pannu a ‘Sasti Copy’ of Kangana Ranaut.

Arre Varun but u have not written our names 🧐 y no appreciation for us ??? Why why why?

We do believe this was Taapsee's way of mocking Rangoli Chandel and her claims. Since the actress shares a great rapport with her Judwaa 2 co-star, there's no way she'd slam him in public and the reason behind her query was targeted towards someone else. Even Varun Dhawan was questioned by the Ranaut sisters for not "mentioning" Kangana's name while praising Judgemental Hai Kya trailer. However, the matter didn't intensify as the actor was quick to acknowledge her presence. We wonder if Rangoli will revert to Taapsee's joke or she'll decide to ignore the matter.