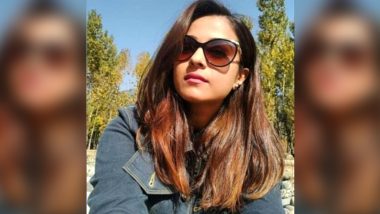 Sushant Singh Rajput's former manager Disha Salian's tragic death is getting investigated thoroughly. She died on June 8, just a few days before the actor's death on June 14. Mumbai police is now investigating the case after there are claims and assumptions about actor's death linked to her death. Adding to the development on the case, a video is going viral on the internet that is claimed to be her last video on social media. She was dancing to Hrithik Roshan's song "Rind Posh Maal" from Mission Kashmir. Sooraj Pancholi Says 'People Will Drive Me To Commit Suicide' After Being Dragged In Disha Salian, Sushant Singh Rajput Death Controversies.

For the uninitiated, Disha allegedly fell from the high rise building in Mumbai. The video is said to be from the night prior to her death according to media reports. She is seen recording the video and while her friends were dancing at this bash. It is also claimed that she was with her fiance Rohan Rai at this bash along with other friends. However, we cannot verify the authenticity of the claim. Below is the video that's going viral.

This is #DishaSalian last video .She is seen dancing with her fiance #RohanRai and friends Only a handful of people. No politician ...#SushantSinghRajput #DishaSalian #DishaAndSSRHomicide theory thrashed pic.twitter.com/xriyIg1VeW

Earlier, Disha's father Satish Salian sent a letter to Mumbai Police that said, "Sir, I am writing this to you as my family has been continuously harassed by journalists and media people in relation to the death of my daughter Disha Salian. In light of the above unfortunate incident and circumstances, I had already submitted a written complaint in Malvani Police Station & ACP's office vide letter dated: 13/07/2020 against derogatory posts and forwards being shared by the listed people in the said letter, leading to defamation of my deceased daughter and my family."

(The above story first appeared on LatestLY on Aug 08, 2020 05:36 PM IST. For more news and updates on politics, world, sports, entertainment and lifestyle, log on to our website latestly.com).