From Priyanka Chopra to Disha Patani, This Twitter User Exposes Hypocrisy Of Bollywood Celebs Who Tweeted on #BlackLivesMatter But Have Endorsed Fairness Ads 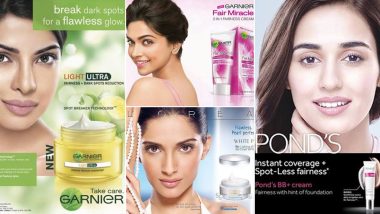 Back in 2017, Abhay Deol had called out the likes of Shah Rukh Khan, Sonam Kapoor, Deepika Padukone, John Abraham and many more for endorsing fairness creams. A country which feels being fair is lovely, these commercials cement that thought deeper in people's psyche than it already is. He did face a lot of flak and criticism for this which includes his Aisha co-star Sonam Kapoor but the actor stood his ground. Three years later, a Twitter user opened the same wound when the person went on a rant exposing the hypocrisy of Bollywood actors speaking on Black Lives Matter but are guilty of promoting fairness. Fairness Cream Advertisers to be Penalised? Narendra Modi Government Proposes 5-Year Jail & Rs 50 Lakh Fine For Misleading Ads

Captioning it as, "List of Indian actors who are speaking on BLM and their fairness cream ads, a thread" it lists all the actors and actresses who at some point in their careers have lent their star power to such creams.

List of Indian actors who are speaking on BLM and their fairness cream ads, a thread : pic.twitter.com/yUeRNLch6U

Here's Sonam. But we would like to add hear that the lady did post a cryptic message in her Insta story yesterday which seemed like a dig at all the celebrities who posted their outrage over George Floyd's death but stayed mum when something similar happened here.

Disha Patani takes the next slide

Assuming that Deepika Padukone is talking about the said incident,

This is very vague but let's count it pic.twitter.com/qCRWKsORMw

The Twitter user explained what was the need for this thread

It's not that their views can't change or that they shouldn't speak up for what they want, it's about selective and performative activism especially when they have at some point propagated a colorist attitude in their own country

Here's one more request from the user

Also just the fact that we make songs like chittiyan kalaiyan and gora gora mukhda and stuff... This needs to stop too!!

The user then picks up Shah Rukh Khan and John Abraham's commercials as well saying the usual - The people who didn't react are guilty too!

Please let us not forget those who haven't even said anything, is that worse? pic.twitter.com/Y3kVyC5jQz

From what we understood, the point here is not to make the celebrities feel bad about raising their voice against Geroge Floyd's death but to expose their hypocrisy which is really shocking.

(The above story first appeared on LatestLY on Jun 02, 2020 02:39 PM IST. For more news and updates on politics, world, sports, entertainment and lifestyle, log on to our website latestly.com).