Gulabo Sitabo is a comedy film directed by Shoojit Sircar and written by Juhi Chaturvedi. The movie stars Amitabh Bachchan and Ayushmann Khurrana in the lead, along with Vijay Raaz, Brijendra Kala, Farrukh Jafar, and Srishti Shrivastava. Gulabo Sitabo is streaming on Amazon Prime Video. 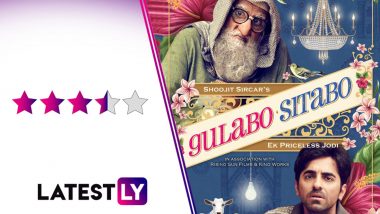 Gulabo Sitabo Movie Review: Gulabo Sitabo is a popular puppet play that local artistes perform in various parts of Uttar Pradesh. The show is about two 'women' who hassle over everything. Shoojit Sircar's film borrows the name and the nature of these puppets but gives it a gender twist. So our 'Gulabo' here is the octogenarian Mirza (Amitabh Bachchan), a grumpy, greedy man who is the landlord of a decrepit mansion, Fatima Mahal, that's in the name of his still-alive wife Begum Fatima (Farrukh Jaffar), and houses a few other tenants. Gulabo Sitabo: Amitabh Bachchan Shares Experience of Shooting with Heavy Prosthetics, Makeup in Hot-Weather and Dealing with Severe Back Pain.

His 'Sitabo' is his most hated tenant Baankey (Ayushmann Khurrana), a flour-grinding shop-owner, who lives with his mother and three sisters. Mirza and Baankey are always at loggerheads at each other. Mirza steals Baankey's bulbs, Baankey refuses to pay the rent (even if it is merely Rs 30) and their fight provides enough amusement for other residents.

The tipping point in their verbal battle comes when Baankey accidentally puts a hole in the wall of the common toilet. Mirza wants to throw him out; Baankey is determined to stay there no matter what. And their altercation provides a hunting ground for outside vultures to swoop in, like Gyanesh (Vijay Raaz), an employee in the archeology department who wants to make Fatima Mahal a heritage place. And, Christopher (Brijendra Kala), a lawyer who deals in property matters, who has his own plans with the house. Will Fatima Mahal be the ultimate sufferer in this 'Gulabo Sitabo' fight?

Gulabo Sitabo takes its own sweet time to get the wheels churning, with Sircar and his writer Juhi Chaturvedi focussing on establishing the main players, their quirks, their living conditions and the ego battles. The pace is sluggish at times, but it picks up once Baankey breaks the wall.

Watch The Trailer of Gulabo Sitabo:

The introduction of Gyanesh and Christopher in the battle makes things spicier, with each trapping the greed-blind Mirza and Baankey in their schemes, and sometimes both of them. Mirza and Baankey trying to outdo each other by hook or crook, has plenty of fun moments, even when we can see from the start itself that this can result in no good for both of them. Gulabo Sitabo Song Jootam Phenk: Amitabh Bachchan and Ayushmann Khurrana's First Song Offers an Insight into their Chucklesome Camaraderie (Watch Video).

It isn't that while men are making a mess, the women are mere spectators to the chaos. There is Baankey's younger sister Guddo (Srishti Shrivastava) who uses her promiscuity and her education (she is the most learned of the lot) to play her own games. And of course, Begum herself, who despite her age, is smarter than the rest, and has a trick or two still hidden in her sleeve.

One thing I liked about Gulabo Sitabo is that Sircar doesn't go apologetic about his flawed leads. Mirza's greediness is cute to watch because the movie plays it in a light-hearted manner, but it isn't so in real-life view. He is an opportunistic man, waiting for his wife to die to get her property in his name. While his hatred for Baankey is special, he is also dour to others, including the kids. And it isn't the age that makes him unlikable.

We are told that Begum married him, despite she being older to him by 15 years and that she was in love with someone else. In another scene, it is mentioned that her relatives cut off ties after she married Mirza, so he didn't have a great reputation in his youth either. Mirza himself admits that he married her for the house. There is no sob story given to make him more likeable, he is just that sour old man, you feel pity for his shallowness.

Baankey, in comparison, might be less bitter but he is no less a devil. He doesn't even remember his sisters' progress in their education, or maybe an unspoken jealousy in not having their opportunities makes him deliberately forgetful. He uses his shop for clandestine meetings with his lover and the movie hints at him doing malpractices with his flour business. And if you do feel bad for both of them at one point, and you will, there will be some wryness in that sympathy of yours.

With these assorted characters, the old-worldly charm of Fatima Mahal and Lucknow's quaint streets, Shoojit Sircar once again gets into the territory that was trademarked by Hrishikesh Mukherjee and Basu Chatterjee.

Gulabo Sitabo, however, reminded me the most of the nostalgic DD series Nukkad by Kundan Shah and Saeed Akhtar Mirza. And it's always a pleasant comparison to make! The fact that he sticks to making his characters remained flawed throughout may not make it as commercial as it sounds. And yet that's what makes the film so good - it doesn't give them any leeway!

Shoojit Sircar's dramedy is beautifully complemented by Shantanu Moitra's lovely score. I particularly loved the notes that he introduces in the final scenes. Avik Mukhopadhyay's camerawork adds a special allure to the charm of Fatima Mahal and its surroundings.

Any flaws? While Gulabo Sitabo is entertaining, it doesn't offer too many surprises in its narrative, save for an enjoyable, absurdist twist in the climax. The pacing is inconsistent, like the overlong finale that refuses to close shop a few minutes earlier.

The politics of the second half keeps Mirza and Baankey away from each other for a long time, denying us of their banter. It may be so because, Ayushmann takes a backseat in the second half, as more focus is on Amitabh and the other characters.

As expected, the performances in the film are absolutely delightful. The prosthetics on his face, that's shrouded by a shawl, may not allow Amitabh Bachchan to show off his emotions, but the actor compensates for that with his body language and vocal tics. The role of Mirza, one of the legend's most interesting anti-hero roles, needed a more physical performance from the superstar, and Big B certainly delivers to the expectations.

Ayushmann Khurrana lends another charming performance for his fans' delight, having already aced the street-smart chichora act by now. Vijay Raaz and Brijendra Kala fit well into their roles of the cunning sharks who have smelt the blood and are looking for their share of the flesh.

Srishti Shrivastava is a scene-stealer, often overshadowing her more prolific co-stars in many scenes. The veteran Farrukh Jaffar is so wonderful in her limited appearances in the film, that I wanted to see more of her by the end.

- The Performances and The Direction

Gulabo Sitabo is Shoojit Sircar acing his inner Basu Chatterjee once again, after Vicky Donor and Piku. Despite the dark turns, the film makes for a delightful watch with its smart, understated sense of humour and the competent performances of its lead cast. Gulabo Sitabo is streaming on Amazon Prime Video.

PS: Shoojit ji, can we have a prequel to this film about a love triangle between Mirza, Begum and a certain Abdul Rehman?

(The above story first appeared on LatestLY on Jun 12, 2020 12:01 AM IST. For more news and updates on politics, world, sports, entertainment and lifestyle, log on to our website latestly.com).