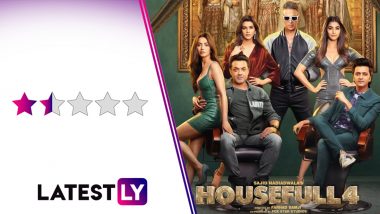 Housefull 4 Movie Review: If you are reading this Housefull 4 review, then you have not figured out the significance of why movies like Housefull are being made. Just like the writer who knows this review ain't gonna make a goddamn difference, but still has to give his two rupees thoughts on the movie. After Dabangg, and Ek Tha Tiger, Housefull is the most critic-proof franchise in Bollywood, that dodges bad reviews to make money at the box office. So if you love the lowbrow humour of the series and don't really care for the reviews, then don't read ahead. For my Housefull 4 review also follows the same tradition in being a scathing one! Housefull 4 Box Office Collection: The Film Records Nearly 25% Occupancy In The Early Morning Shows.

Harry (Akshay Kumar), Max (Bobby Deol) and Roy (Riteish Deshmukh) are three loser brothers in London, who are heavily indebted to a Michael Bhai. To solve this crisis, they have wooed three rich sisters - Pooja (Pooja Hegde), Kriti (Kriti Sanon) and  Neha (Kriti Kharbanda) respectively, and are all set to marry them.

Now Harry has two quirks that he just can't get rid of. One, he borrows the amnesia (and the BG score) from Golmaal's Pappi Bhai, that he forgets things when he hears anything loud. It's another matter, that this ailment is conveniently played as per the screenwriters' whims (can't believe that six people are involved in writing this suar ki tatti) to get some laughs.

Second is that he has flashes of a life he doesn't remember well. When the couples go to a royal palace in Sitamgarh, India for their destination wedding, familiar incidents and a face in Aakhri Pasta (Chunky Pandey) there trigger Harry's past life memories even more.

He learns that in 1419, he was Bala, the bald-headed vain prince of Madavgarh who was betrothed to Madhu (Kriti Sanon), the eldest princess of Sitamgarh. Meanwhile, her other two sisters Mala (Pooja Hegde) and Meena (Kriti Kharbanda) were set to marry the palace dance teacher Bangdu Maharaj (Riteish) and the royal bodyguard, Dharamputra (Bobby Deol) respectively. A tragic turn, involving a vengeance-seeking wild tribal head Gama (Rana Daggubati), brings their old story to end, and now it is upto Harry to make his brothers and their lovers realise that they are marrying the wrong partners.

Look, expecting anything like a masterpiece from Housefull franchise is a laughable notion indeed. The notion of wanting the premise to be original is funnier than the whole film itself.  So if you have really set the bar low for when it comes to humour quotient, if you find lines like 'Aaj Mera Fast Hai, Isliye Thoda Slow Maara!' or frequent scenes of pigeons shitting on your face funny -then you will find Housefull 4, directed by Farhad Samji, funny too. Housefull 4 Fake Reviews Flood Twitter a Day Prior to Akshay Kumar, Kriti Sanon, Pooja Hegde’s Film’s Official Release Date.

If not, then you will curse yourself for wanting Akshay to take a break from his nationalist social dramas. That now feels like the lesser of the two devils.

I have not been a fan of the franchise's humour much, though I did enjoy the comedy bits of the last film, Housefull 3 most. Guilty as charged. By then, I had set my bar to enjoy these films quite low, perhaps.

In the case of Housefull 4, there are some moments that did manage to make me chuckle. Most of them are found in the 1419 set of events, and involves the antics of the amoral Bala that has Akshay in scene-stealing mode. The present-era scenes pale big time when compared to the Bala scenes. You can't help but break into a smile when he silently gestures his guard to kill his father (Parikshit Sahni) while hugging the latter. Or the parody of the Baahubali title song played when he is exiled from his kingdom. Yes, there are humour bits that feel genius but it is scattered far and wide in that tasteless muck. The period portions give the film a different flavour, and lends to some visual appeal.

Housefull 4 is appealing to the eyes, with the productions values and Sudeep Chatterjee's cinematography playing their parts well. Julius Packiam's BG score is another asset. The VFX is decent, though in some portions, are patchy. But for a comedy film, that's the most forgivable part, right?

Otherwise, most of the humour in Housefull 4 is regressive, bland and often predictable. Like, because Rana Daggubati is there in the film, you really need to make a couple of random Baahubali jokes.

I admire the film's audacity to laugh at itself, like when it pokes fun at the three leading men trying to romance girls half their age. But those jokes feel like the writers saying, 'We know what's wrong. See, we are also laughing about it. So why can't you? Don't really expect anything else!'

What's even more audacious is how the gags sometimes turn sleazy and even vulgar. Like Harry forcibly planting a kiss on the Queen Elizabeth lookalike. Or the girls' father lusting at the picture of the mother of his sons-in-law, because, well, he is played by Ranjith, and then expects us to laugh at it. Considering that two prominent cast and crew members of the film - actor Nana Patekar and director Sajid Khan - were dropped from the film over #MeToo charges, the makers could have avoided such gags. Ah, well, at least the heroines are not shown to be daft bimbos like the trio of Jacqueline Fernandez, Nargis Fakhri and Lisa Haydon in Housefull 3. Even if in the film, they are more or less restricted to being attractive showpieces, being wooed by men with whom they have no discernible chemistry.

Watch The Trailer of Housefull 4:

The only actor who seems to be having fun here, and also raising fun on the screen is Akshay Kumar. I know it is wrong to call the film's main lead a scene-stealer, but that's exactly what Akshay is in this film, especially as the twisted Bala. Even in the tritest scenes, the actor owns it with his energetic act, animated expressions and generally, being the most enthusiastic of the lot. It also helps that he is given the most material to work with, the perks of being the biggest star in the cast by miles.

Others are often sidelined in Akshay's gigantic shadow. Riteish Deshmukh shines in some of the portions where he is Bangdu Maharaj, but otherwise, is okay. Bobby Deol is just about there in the film as the perfunctory third male lead; he is, in fact, funnier in the gag-reel shown in the end-credits. Between Race 3 and Housefull 4, can't really decide which film was more thankless to this man!

Chunky Pandey is, thankfully, restrained as the film's regular funnyman. Johnny Lever raises some laughs as Pasta's reincarnated lover (who was played by the comedian's daughter, Jamie). Rana Daggubati is fiercely impressive in his getup as the wild Gama, though the Telugu star does make a fool of himself in the final portions of the film. Pray, what was Nawazuddin Siddiqui's hammy cameo as Ramsey Baba all about? Apart from making a bad song about how to make the lyrics rhyme with Alia Bhatt, his presence hardly adds anything to the film.

- Visually Appealing In Most Portions

Can't really say that Housefull 4, despite being the biggest film in the franchise, is the nadir of the series. There's isn't much to begin with there. What astounds me is that such films still get made with big names attached, such humour is passed off as funny by a set of writers. Ah, well, the positive aspect to see here, is that Housefull 4 makes you yearn to see Akshay Kumar back in his jingoistic films. At least, we can get a Pad Man or a Mission Mangal once in a while.

(The above story first appeared on LatestLY on Oct 25, 2019 12:42 PM IST. For more news and updates on politics, world, sports, entertainment and lifestyle, log on to our website latestly.com).