Hrithik Roshan Birthday Special: From Krrish 3 To War - Check Out The Five Biggest Hits Of The Actor

Hrithik Roshan celebrates his birthday today. He is probably the last superstar whose debut film Kaho Naa Pyar Hai in 2000 saw unprecedented love and adoration, something Bollywood hadn't seen for years. Since then, the actor has managed to collect a lot of box office trophies and today we bring to you five of his biggest hits ever! 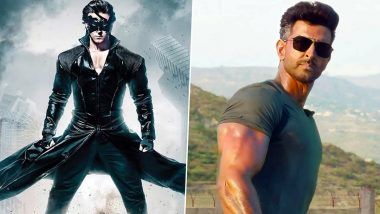 Today is Hrithik Roshan's birthday. One of the most handsome Bollywood men to ever walk on earth. The man is so good-looking, often his acting talent gets overshadowed by it. Can you blame anyone for that? He obviously is humbled by this adoration and doesn't think it's an achievement of any kind. This humility has won him even more fans than his blockbusters. The fact that a starkid understands the privilege he has been bestowed with makes him one of us and thus, he is so loved. In fact, Hrithik Roshan is perhaps the last superstar in all sense of the word. He is super hot, a super dancer, super action man, and a superb actor. Hrithik Roshan Flies a Drone like a Pro, Says ‘Entering 2021 with New Skills’ (Watch Video)

Hrithik Roshan is a complete package. If he works with the classes, he knows just the thing to matter to the masses. So if there's a Zindagi Na Milegi Dobara, there's also an Agneepath. So on his birthday today, we will chart the journey of his box office glories.

War was a two-hero film but all anybody could talk about was how scorching hot that man looked. No offense, Tiger Shroff! In fact, we totally understood the young actor's wide-eyed fascination so marvelously shown in the film. It's as if this movie was made to worship the Indian Adonis, Hrithik Roshan. It also worked the movie has some incredible action sequence. War still holds the record of the highest opening day numbers with Rs 53.35 crore.

Many aspersions have been cast on the box office numbers of Krrish 3, but nobody can deny that only Hrithik Roshan managed to do something which many superstars tried. He made an Indian superhero a blockbuster at the box office.

A remake of Knight & Day, we think we can safely say Hrithik and Katrina were hotter than even the original cast of Tom Cruise and Cameron Diaz. Falling for his suave maneuvers was so easy and that's exactly what happened to the audience at the theatres.

Hrithik has this quality. Every time his critics think he is getting complacent about his roles, he does 360-degree turn to change perspectives. It is really difficult to envision Hrithik as a poor school teacher but he did it so well, you can only applaud.

A remake again of the 1990 Agneepath movie starring Amitabh Bachchan, Hrithik had huge shoes to fill. But without resorting to any mimicry of any kind, the actor added his own spin to the character making it look independent of how Bachchan played Vijay Dinananth Chauhan.

(The above story first appeared on LatestLY on Jan 10, 2021 12:00 AM IST. For more news and updates on politics, world, sports, entertainment and lifestyle, log on to our website latestly.com).