Irrfan Khan’s Death Anniversary: 3 Things We Know About the Actor’s Last Film 'The Song of Scorpions'

Irrfan's last film with Anup Singh still remains to be released in India. Titled, The Song of Scorpions, the film had its world premiere at the 70th Locarno Film Festival in Switzerland in August, 2017. 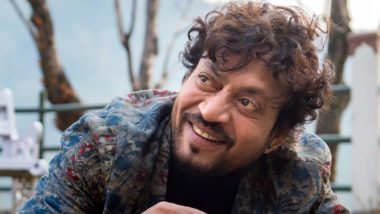 Today marks the one year death anniversary of the very talented Irrfan Khan. The actor, who was last seen in Angrezi Medium, passed away after battling colon cancer for a long time. His career spanning over three decades was nothing less than magical. He gave us films like Paan Singh Tomar, Karwaan, Hindi Medium, and etched a special place in everyone's heart. Irrfan Khan Honoured Among Other Celebs We Lost in SAG Awards 2021's 'In Memoriam' Segment.

Irrfan's last film with Anup Singh still remains to be released in India. Titled, The Song of Scorpions, the film had its world premiere at the 70th Locarno Film Festival in Switzerland in August, 2017, but still hasn't gotten a release date in India. In remembrance of the actor, we decided to dig a little and find out what all we know about the film. Check the list below to get all the details of Khan's last film.

The Film Is Ready To Release In India

The Song Of Scorpions is a Swiss-French-Singaporean Rajasthani language drama starring Golshifteh Farahani in the lead. She will be seen essaying the role of a tribal woman learning the ancient art of healing. The film also features Waheeda Rehman and Shashank Arora in key roles.

Irrfan will essay the role of a camel trader in the film. His character Aadam falls in love with Nooran (Golshifteh Farahani's character) ever since he hears her voice for the first time and offers her to get married to him. Irrfan Khan Will Be Remembered for His Diverse Roles: Lok Sabha Speaker Om Birla.

The Song Of Scorpions is presented by Panorama Spotlight and 70MM Talkies with Feather Light Films and KNM. Last year, the makers had shared a clip from the film and captioned it as, “A golden chance to witness the magician on the big screen for one last time!!!” The fans now await the announcement of the film's release date.

(The above story first appeared on LatestLY on Apr 29, 2021 09:47 PM IST. For more news and updates on politics, world, sports, entertainment and lifestyle, log on to our website latestly.com).