Kangana Ranaut Gets Y Plus Category Security, Centre Approves Demand Ahead of Her Visit to Mumbai 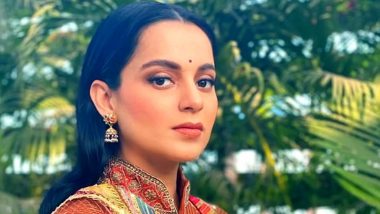 Bollywood actress Kangna Ranaut is known to make controversial statements. The actress had recently made a remark where she compared Mumbai to Pakistan-occupied-Kashmir (PoK). Her comments had did not go down well with many political leaders. She was threatened by Shiv Sena leaders after she compared Mumbai with ‘PoK’ early this week through her official Twitter handle. Kangana later posted that she was threatened and had demanded for security ahead of her visit to Mumbai. According to latest reports, the Centre has approved the demand and has decided to provide the actress with Y Plus category security. Kangana Ranaut Responds to Maharashtra Home Minister Anil Deshmukh’s 'Strict-Action' Remark, Says ‘From PoK to Taliban in One Day’.

Kangana Ranaut would be visiting Mumbai on September 9 and the Ministry of Home Affairs has granted her Y Plus category security. Such tightened security is provided to high-risk individuals who has been given threats. In this category, the security level provided reportedly include, 11 personnel, including 1 or 2 commandos and police personnel. Kangana Ranaut Should Apologise for Calling Mumbai a 'Mini Pakistan', Says Sanjay Raut.

The Bollywood actress has thanked Home Minister Amit Shah for providing her such tight security ahead of her visit to Mumbai. Kangana Ranaut’s tweet had triggered angry reactions from Maharashtra government and also Shiv Sena leader Sanjay Raut. Sanjay Raut hit back the actress by asking Kangana not to return to Mumbai for criticising Mumbai Police and also asked her to apologise for her PoK remarks. Kangana then posted a video message and mentioned, “Your people are threatening me, still I’ll come to Mumbai on September 9.”

(The above story first appeared on LatestLY on Sep 07, 2020 12:24 PM IST. For more news and updates on politics, world, sports, entertainment and lifestyle, log on to our website latestly.com).