In this video, Varun Dhawan has complimented Karan Johar for his new look and also asked him the reason behind sporting grey hair and not going for colouring. 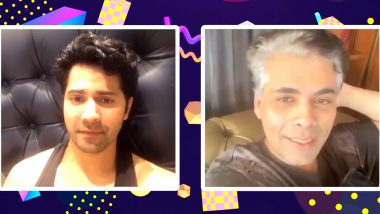 From getting involved in household chores to experimenting new hairstyles, celebs are definitely trying and learning some intriguing things during this lockdown period. In fact, there are some who have even ditched their hair colouring routine and opted to flaunt their natural side, and one among them is filmmaker-producer, Karan Johar. And we got to catch a glimpse of his new avatar, his quarantine new look, while he was having a conversation with Varun Dhawan. Karan Johar's Kids Yash and Roohi Call Him an Oldie and The Director Is Not Taking it Lightly! (Watch Funny Video).

Karan Johar often keeps sharing videos on his Instagram that is ‘Lockdown with Johars’ in which we get to catch a glimpse of his children, Yash and Roohi. On April 24 when KJo shared a video, we saw how Roohi tells her daddy dearest, ‘You hair is white, you’re looking like buddha (oldie)’. Well, that was a hilarious one! However, we really couldn’t see KJo’s new look in that video. But during a live chat session with Varun on Insta, we did get to see Karan’s new look. KJo flaunted his grey hair and not just Varun, even netizens who joined the live session were impressed with Karan’s new look.

Varun Dhawan has complimented Karan Johar for his new look and also asked him the reason behind sporting grey hair and not going for colouring. To this Karan Johar responded saying as, “I’m sitting in the house, not doing anything, whose going to colour and what am I beautifying myself and for who and for what. I am just happy I’m with my kids and mom. Also you must understand, all the chemicals that keep going in our hair is not good. So I think this would be a good holiday for my hair as well.” Karan Johar is Embarrassed During Lockdown As Yash and Roohi Put His 'S*x and Magic' on Display (Watch Video).

In the beginning of the video, you’ll also see how Varun Dhawan tells Karan Johar how he looks like a Bond villain. What do you think about that? And did you like Karan Johar’s new look? Share your thoughts with us in the comment section below.

(The above story first appeared on LatestLY on Apr 25, 2020 08:59 AM IST. For more news and updates on politics, world, sports, entertainment and lifestyle, log on to our website latestly.com).