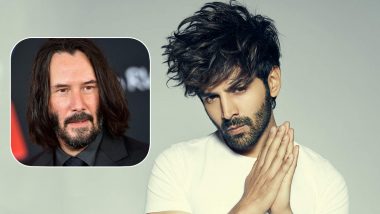 The only thing that is growing as long as this pandemic is Kartik Aaryan's hair during the lockdown. The actor who has not stepped out at all during this pandemic, kept in touch with his fans through social media posts and often posted pictures of his 'Lockdown looks'. His fans have been digging these new looks of Kartik's and today was no different. He posted a fresh sunkissed picture of his and all his fans went gaga over it. Did Kartik Aaryan Replace Virat Kohli as the Face of Manyavar?

Kartik shared the picture on Instagram where he is seen showing off his long locks as he sees towards the bright beaming light of the sun. Within a few minutes of him posting the picture, his comment section was flooded with messages where his fans compared him to Hollywood actor Keane Reeves. His Pati Patni Aur Woh co-star Bhumi Pednekar also dropped a comment on his post saying, "And the hair."

Let the eyes do the talking

On the work front, Kartik Aaryan was busy shooting for Bhool Bhulaiyaa post the lockdown. Also starring Kiara Advani and Tabu, the film is helmed by Anees Bazmee. Last month, Kartik Aaryan also walked the ramp to kickstart the Lakme Fashion Week online. The actor had turned showstopper for celebrity costume designer Manish Malhotra, who teamed up with Mijwan Welfare Association for the fashion week. Kartik Aaryan Trolled For Using a Basic Caption, Ananya Panday Not Spared Either.

Apart from this, Kartik also has Karan Johar's Dostana 2 with Janhvi Kapoor and Lakshya. The film is helmed by Collin D'Cunha and the team shot for the film extensively last year. According to several reports, Kartik has also signed an action flick with Om Raut.

(The above story first appeared on LatestLY on Nov 06, 2020 06:46 PM IST. For more news and updates on politics, world, sports, entertainment and lifestyle, log on to our website latestly.com).