Khandaani Shafakhana is an upcoming comedy drama featuring Sonakshi Sinha and Varun Sharma in the lead. This Shilpi Dasgupta directorial was initially scheduled to release on July 26, however it has been postponed and will now hit the silver screens on August 2. 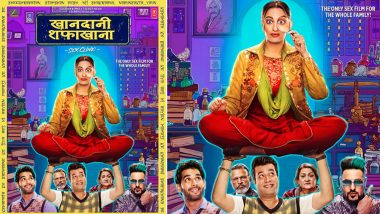 Khandaani Shafakhana is an upcoming comedy drama featuring Sonakshi Sinha and Varun Sharma in the lead. The posters and trailer of this flick has impressed the movie buffs already and all are eagerly waiting for the film to be released. This Shilpi Dasgupta directorial was initially scheduled to release on July 26, however it has been postponed and will now hit the silver screens on August 2. About the film’s new release date Sonakshi Sinha tweeted, “Jann hitt mein jaari ek soochna #KhandaaniShafakhana ab haqq se khulega 2nd August ko!!! #BaatTohKaro”. Khandaani Shafakhana Trailer: Sonakshi Sinha, Varun Sharma and Badshah Promise to Take You on a Fun-Filled Ride (Watch Video).

Khandaani Shafakhana also marks the acting debut of rapper Badshah. Another reason why all are eagerly looking forward to this release is the song "Shehar Ki Ladki". Yes, the hit number that featured Suniel Shetty and Raveena Tandon will be remade and Diana Penty and Badshah would be part of this remake. In fact the shooting of the song will take place today and tomorrow. Suniel Shetty-Raveen Tandon’s Iconic Song Shehar Ki Ladki to Be Recreated, Diana Penty-Badshah to Be Featured in the Remake.

In an interview to IANS Sonakshi Sinha had stated, “I am extremely happy to be part of this film which is so close to the world around us, to step into the shoes of a small town girl, and face the hilarious, madcap challenges thrown at her. Full of flavour, fun and emotions.” She would be portraying the role of Babita ‘Baby’ Bedi from Hoshiarpur in Punjab, who works in a sex clinic, and Varun Sharma as her brother. The film’s tagline also mentions, ‘The only sex film for the whole family’. Stay tuned for more updates on entertainment related stories.

(The above story first appeared on LatestLY on Jun 27, 2019 01:37 PM IST. For more news and updates on politics, world, sports, entertainment and lifestyle, log on to our website latestly.com).