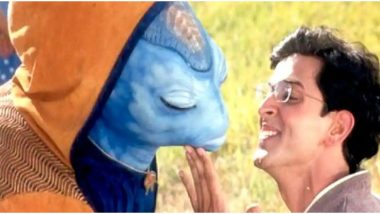 Koi Mil Gaya, Bollywood's crossing of ET with Forrest Gump, came out on August 8, 2003. The movie is known for Hrithik Roshan's fine performance as a mentally challenged man and also for the lovable (albeit expressionless) blue alien Jadoo. Koi... Mil Gaya, also starring Rekha, Preity Zinta and a young Hansika Motwani, was directed by Rakesh Roshan and was a huge hit then. It also spawned two sequels, Krrish and Krrish 3, that entered superhero territory. Deepika Padukone To Work With Hrithik Roshan in Krrish 4?

Now that Koi Mil Gaya has completed  17 years, Hrithik Roshan has put an 'emotional' post for Jadoo, with a montage of scenes from the film featuring his character and the alien. He writes, "Some friendships defy space and time. Someday hopefully soon they will meet again. Miss you jaadu. #KoiMilGaya". Apart from leaving us a little confused about how we spell the alien's name - is it Jadoo or Jaadu (this sounds like Hindi for 'broom'?) - did Hrithik drop a cryptic hint in his tweet?

Especially the phrase - "Someday hopefully soon they will meet again."

As you might be aware, Krrish 4 is in the works already. Even though a proper announcement has not made, there are reports that the movie will go on floors in 2021. So does Hrithik's tweet hint that Jadoo might return for the sequel? In fact, both Rakesh and Hrithik have hinted about the alien's return for the sequel in the past. Hrithik Roshan Reveals Further Plans Regarding His Much-Loved Superhero Film Krrish 4!

If so, this would be interesting since, for one, Jadoo would be more expressive this time, since our VFX have improved a lot. Secondly, if he comes back to Earth, he won't be meeting his friend Rohit, as the character had died in Krrish 3. Instead, he would be meeting his son, the superhero Krrish, who owes his powers to the alien.

There are many possibilities that Jadoo's return could bring to the franchise - an intergalactic romp for Krrish? So let's hope that the Roshans are truly planning to bring Jadoo back on the big screen.

(The above story first appeared on LatestLY on Aug 08, 2020 11:14 PM IST. For more news and updates on politics, world, sports, entertainment and lifestyle, log on to our website latestly.com).