A documentary called 'Period. End of Sentence' has been shortlisted in the Documentary Short Subject Category. 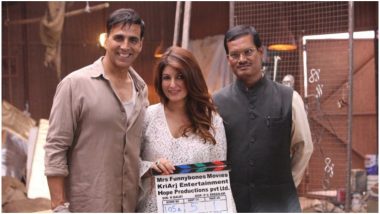 Akshay Kumar's PadMan was one of the most talked about films of the year. The movie is inspired by the life of Tamil Nadu activist, Arunachalam Muruganathan, who made low-cost sanitary napkins for his women. PadMan is not exactly a biopic, it changes the setting to North of India, and made Akshay Kumar's fictional character as the protagonist. The movie was directed by R Balki and was also the maiden production venture of Twinkle Khanna. PadMan Box Office in China: Akshay Kumar and Sonam Kapoor's Film Disappoints In Its Opening Weekend and We Have No Clue Why!

While PadMan had got decent reviews, it was not considered as Indian's official entry for the Oscars, a honour which went to Rima Das' Village Rockstars. We don't know if the producers of PadMan tried pitching the movie to the panel, since there is an option to go privately too. Whatever the case is, neither Village Rockstars nor PadMan has been considered in the shortlist for all Best Picture in a Foreign Language contenders. Oscars 2019: Village Rockstars, India's Official Entry For Best Foreign Film, No Longer In the Race.

But the race hasn't ended for the real Pad Man at the Oscars. A documentary called 'Period. End of Sentence' has been shortlisted in the Documentary Short Subject Category. The documentary's subject is the works of Arunachalam Muruganathan and is directed by directed by Iranian-American filmmaker Rayka Zehtabchi. Guneet Monga, the producer who has backed films like Masaan, is also supporting this film. Sharing the news on her Insta page, she wrote, "Waking up to this shortlist! So proud and so exciting... I am so humbled to be a part of the producing team."

All the very best for this film and its makers! Hope it makes to the final round and make Arunachalam Muruganathan and his efforts world-famous!

(The above story first appeared on LatestLY on Dec 18, 2018 02:15 PM IST. For more news and updates on politics, world, sports, entertainment and lifestyle, log on to our website latestly.com).