Deepika is said to be joining SRK and team this week and wrap up the shoot for the song. Shah Rukh Khan is said to have kickstarted the shoot for Pathan's Mumbai schedule in YRF studios three days back. 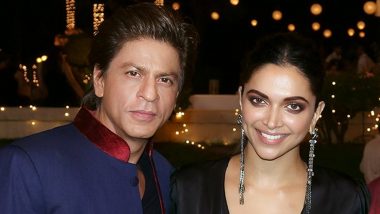 Deepika Padukone and Shah Rukh Khan are the ultimate on-screen jodi. The two were first seen together in Om Shanti Om and they went on to create magic when they united for Chennai Express and Happy New Year after this. Fan loved their chemistry in all these films and are now looking forward to seeing them in Pathan. The film that also stars John Abraham in a key role while Salman Khan recently confirmed his cameo in the action film. The film is currently being shot in Mumbai and rumour has it that DP and SRK will soon shoot for a song now. Deepika Padukone Turns Into a Lawyer For THIS Project.

A source close to the development told Bollywood Hungama that Deepika will be shaking a leg with Shah Rukh Khan on an upbeat number. The song will be created by none other than Vishal and Shekar. Deepika is said to be joining SRK and team this week and wrap up the shoot for the song. Shah Rukh Khan is said to have kickstarted the shoot for Pathan's Mumbai schedule in YRF studios three days back.

It is also suggested that the superstar even shot for a big scale action scene on the sets. Shah Rukh was earlier spotted shooting for some high scale action scenes in Dubai as well. Coming back to the song, Deepika and Shah Rukh Khan have given us some very peppy dance number in the past so it will be exciting to see what this song will look like. Ramayana 3D: Mahesh Babu Approached To Play Lord Ram In Deepika Padukone Starrer?

She will be seen in Shakun Batra's upcoming yet-untitled film that also stars Siddhant Chaturvedi and Ananya Panday. Deepika will also be seen in an untitled film with Amitabh Bachchan and Prabhas, and she has '83 in line where she stars opposite husband Ranveer Singh. She will also unite with Bollywood star Hrithik Roshan for the first time for an action-adventure, Fighter, which will be directed by Siddharth Anand.

(The above story first appeared on LatestLY on Feb 18, 2021 06:11 PM IST. For more news and updates on politics, world, sports, entertainment and lifestyle, log on to our website latestly.com).