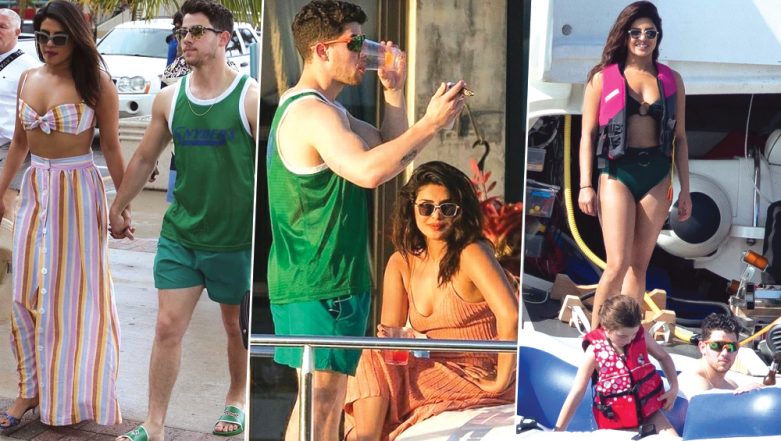 Priyanka Chopra and Nick Jonas are having the best time at Miami right now! The couple along with the other two Jonas couples- Kevin-Danielle, Joe-Sophie Turner are away for another work-vacation. The pictures and the videos from their beach vacay are all over the internet. However, the des girl recently won the desi fans by making Nick, Joe and Sophie groove on Veere Di Wedding song "Tareefan". In fact, even Sonam Kapoor could not stop herself from commenting 'Wah Peecee'! Priyanka Chopra-Nick Jonas' Miami Trip Video Gets a Hum Saath Saath Hai Song 'ABCDEFGHI' Twist and It is Hilarious!.

The song by rapper Badshah became a rage in no time. It features Sonam Kapoor, Kareena Kapoor Khan, Swara Bhaskar and Shikha Talsania in the lead. The sexy and upbeat song was an instant hit compelling the fans to create multiple covers of the same. However, this video where the Jonas members are seen enjoying the track is amusing! Those who badly wanted PC to make Nick dance on "mujhse shaadi karogi" or "tenu leke" during their wedding, look she's made him groove on another hit Bollywood number atleast!

Meanwhile, internet is full of their moments from the Miami trip. PC and Sophie's sultry pictures in bikini are breaking the internet. They were also seen having the most of the summer by indulging into some fun water sport activities. The Game of Thrones actress and the former Miss World were seen jet-skiing here. Also, their stylish summer dresses here impressed the fashion police. On the other hand, NickYanka's cute PDA moments are also being adored by their fans. Coming back to this Tareefan video, we are waiting for more such crossovers!