Radhe: Your Most Wanted Bhai – Is Salman Khan’s Name in the Film Its Big Hit Factor?

Radhe: Your Most Wanted Bhai, the title of Salman Khan's latest film that premiered on the digital platforms, Zee5 and Zeeplex, on the occasions of Eid on May 13, catches one's fancy. It certainly helps the film generate curiosity as well as positive vibes, a factor that helps a film get an opening response. 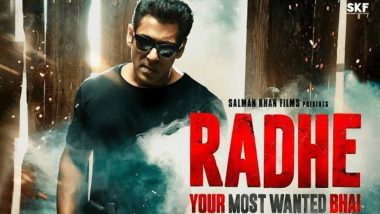 Radhe: Your Most Wanted Bhai, the title of Salman Khan's latest film that premiered on the digital platforms, Zee5 and Zeeplex, on the occasions of Eid on May 13, catches one's fancy. It certainly helps the film generate curiosity as well as positive vibes, a factor that helps a film get an opening response. Actually, "Radhe" was Salman's screen name in his earlier hit "Tere Naam", and later used in his comeback film "Wanted" (2009), which was a remake of the Telugu film "Pokiri", directed by Puri Jagannadh. The Hindi remake was directed by Prabhu Deva. Aside:Radhe: Salman Khan Reminds Fans Watching Movie Illegally Is a Serious Crime; Says Cyber-Cell Is Taking Down Illegal Piracy Sites.

Salman Khan has been a versatile actor who established himself with his very second film, "Maine Pyar Kiya", a traditional love story, and he has reigned in comic roles in films from "Andaz Apna Apna" and "Judwa" to "Ready". He has also played a second fiddle to Jackie Shroff in "Bandhan". Just when Salman's career seemed to be on the crossroads, came "Wanted", which, though an action film, was fun to watch. The film also brought Salman back into reckoning. With the films that followed -- the "Dabangg" series, "Kick", "Ek Tha Tiger" and "Tiger Zinda Hai" etc -- he established himself as the action hero like none other. He kept his career balanced doing films like "Jai Ho" and "Bajrangi Bhaijaan". Radhe: Salman Khan and Disha Patani’s Film Collects $12,75,000 in Overseas Markets Over Two Days.

Salman Khan and the Eid release slot have gone together. The people and his fans expect a special Salman treat every Eid. Sadly, his recent Eid releases have been disappointing his fans. Films like "Tubelight" (sold for high price, Salman's production house had to compensate the film's distributors for the heavy losses incurred), "Bharat" and "Race 3" did not go well with the audience. There were no films releasing in 2020 due to the Covid-19 pandemic and lockdown (though "Radhe" was slated for release on Eid 2020). The year 2021 would have been the same, as cinema halls have been closed again due to the ongoing lockdown.

With lockdown showing no signs of coming to an end any time soon, and Salman Khan Productions being ready with a new film, "Radhe", the only alternative was the digital media. Quite a few major star-cast, big budget films have been awaiting release, holding back for the cinema halls to reopen. After all, films costing two to three-crore to make were so far not expected to recover costs nor cover the vast audience base without cinema release.

As for the digital media and the OTT streaming platforms, some were buying films that were lying ready, though none so far boasted of face value, let alone merit to grow gradually. They were the kind of films that would find it tough to get play time in cinemas and, even if they did, would not last a day. Finally, a big film comes the OTT way as Zee Group and Salman Khan Productions strike a deal for a solo digital release with "Radhe". The initial plan was to release the film simultaneously in cinemas as well as digital media. The major cinema managements were not in favour of this arrangement and sought solo theatrical release. But, before their stand could matter, the lockdown left only one option -- the digital OTT and Pay Per View.

Zee Group was investing big money against all the rights of Radhe to bag all the rights including theatrical, satellite, digital, overseas and music. One would have expected them to enhance the rates for viewing the film, they tagged it at a moderate Rs 249 per view. They did not seem to take the greedy approach the cinemas did with such films, especially when release is planned to coincide with a major holiday week.

It was because the Zee management folks watched the film before it was put out for the public, or was it the brainwave of some executives that the company came up with an alternate offer -- to subscribe for the Zee5 platform at Rs 499 and get access to the film for six hours as well as one-year access to all other Zee5 content. This way, those who were already subscribers of Zee5 did not feel cheated since they could access the film for six hours.

This move would give the Zee5 subscriber base a major boost. So, does the film live up to the Eid release expectations? Not really. The film has just one highlight -- Salman Khan in bare torso felling just about every bad man that comes his way. The main villain, played by Randeep Hooda, and Salman come face to face many times through the film but spare the fight to finish till end. This has been the undoing of many big films -- the film needs to save the fight with the villain till the very end. It is only when you give your villain a solid build-up, the status of the hero rises with him.

The patchy script alternates between action, gore and a few pauses for dance routines, till the next sequence is thought up. There is little concern about supporting actors and all are turned in to caricatures. The film adds to the recent Eid releases from Salman, a disappointment. Thanks to digital release, there will be no count of box office figures, nor the footfalls the film attracted. That will keep Brand Salman going for some more time.

However, as far as Zee is concerned, it is a win-win proposal. This platform has a captive viewership in its existing subscribers and "Radhe" will add to it manifold. Also, the price of the rights was revised downwards when the theatrical release in India was not possible. Expect social media to add to viewership, as such films make for a compulsive debate. Here, there are folks who like to watch and debate and to make sure if a film is really bad or good!

(The above story first appeared on LatestLY on May 16, 2021 09:51 AM IST. For more news and updates on politics, world, sports, entertainment and lifestyle, log on to our website latestly.com).