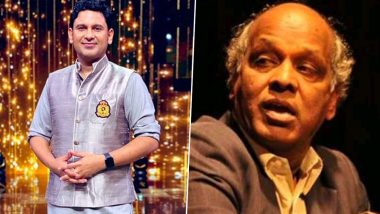 In an unfortunate incident, famous Urdu poet, shayar and lyricist Rahat Indori passed away. The late artist who was admitted on Tuesday morning for testing COVID-19, suffered from heart attack and left for the heavenly abode. The fans are totally devastated with the news and are pouring condolence messages for the the late renowned personality. One of them is lyricist Manoj Muntashir, who tweeted about Dr Rahat's passing away. Rahat Indori Passes Away: Fans Pour Condolence Messages For Late Renowned Poet.

Rahat Qureshi, who later became well-known as Rahat Indori, had an international acclaim due to his beautiful words and poems. He won hearts at Mushaira and Kavi Sammelan from last 40 - 45 Years. He also travelled to various places on the globe like USA, UK, UAE, Australia, Canada, Singapore, Mauritius, KSA, Kuwait, Qatar, Bahrain, Oman, Pakistan, Bangladesh, Nepal to attend the poetic symposiums, apart from India. Rahat Indori's words are here to stay for generations together. RIP.

(The above story first appeared on LatestLY on Aug 11, 2020 06:53 PM IST. For more news and updates on politics, world, sports, entertainment and lifestyle, log on to our website latestly.com).