Ever since the lockdown has been imposed owing to the coronavirus pandemic, the ongoing works in the show business have been drastically affected. 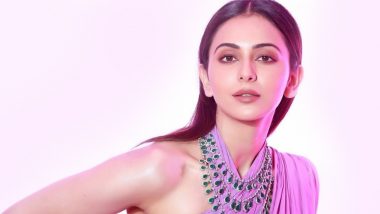 Ever since the lockdown has been imposed owing to the coronavirus pandemic, the ongoing works in the show business have been drastically affected. The films that were scheduled to be released during the time of summer this year, had to be postponed due to the current situation, as the theatres had to be closed down in order to avoid mass gatherings. The shooting of several projects had to be stalled considering the safety of the cast and crew. The coronavirus pandemic has indeed brought everything to a standstill in the entertainment industry. Rakul Preet Singh, who had three upcoming projects in Bollywood, reveals to a leading tabloid how the shooting of those upcoming films have been affected. Ajay Devgn, Rakul Preet Singh and Sidharth Malhotra Starrer Comedy-Drama Is Titled ‘Thank God’.

The three upcoming projects of Rakul Preet Singh were Attack (a film with John Abraham), an untitled rom-com with Arjun Kapoor and a movie with Ajay Devgn titled Thank God. The actress revealed to Mid-Day that she had allotted a month for the last schedule of John Abraham and Arjun Kapoor films. Rakul stated that when the lockdown was announced, she was shooting for Attack and also for the film with Arjun Kapoor. She stated, “Only one week of the shoot was left and it (the yet-untitled film with Kapoor) was supposed to release in July. Since the March shoot was in Europe, our tickets were ready well in advance.” Rakul Preet and Arjun Kapoor Go Goofy As Their Upcoming Romantic Film Goes On Floors (View Pic).

Talking about the film with Ajay Devgn and Sidharth Malhotra, which is titled as Thank God, Rakul Preet Singh further mentioned, “I was supposed to start a new project with Sidharth Malhotra and Ajay sir in April, but now we don't know when that schedule will begin.” Well, there is no clarity when the lockdown will be lifted and when the shootings can be resumed. Stay tuned for further updates from the world of entertainment.

(The above story first appeared on LatestLY on May 14, 2020 08:56 AM IST. For more news and updates on politics, world, sports, entertainment and lifestyle, log on to our website latestly.com).