Ranveer Singh Shares First Picture Of 2021 On Instagram And It Is From His Trip To Ranthambore!

Capturing the panoramic view on his camera lens, Ranveer Singh, on Saturday is seen enjoying the nature bliss from his recent annual trip to Ranthambore National Park. 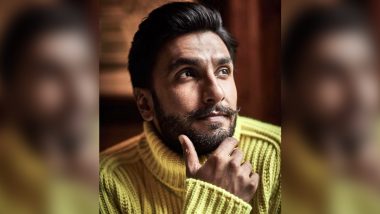 New Delhi, Jan 2: Capturing the panoramic view on his camera lens, Ranveer Singh, on Saturday is seen enjoying the nature bliss from his recent annual trip to Ranthambore National Park. The Kapoors, Bhatts and Singhs are seemed to be enjoying the celebrations of New Year at Rajasthan's national reserve park Ranthambore. Ranbir Kapoor Is A Brilliant Wildlife Photographer And This Picture Shared By Alia Bhatt’s Sister Shaheen From Their Ranthambore Trip Is Enough To Prove!

Flabbergasted with the striking natural beauty, the 'Padmaavat' actor stopped by one of the lakes near the land and captured the same in his camera. Sharing the same on his Instagram handle, the actor treated his fans with the first picture by him from the trip. Keeping the caption simple, Singh wrote, "#views" with the post. The post managed to accumulate more than two lakh likes within a few minutes of being posted. This Pic Of Alia Bhatt-Ranbir Kapoor With Deepika Padukone-Ranveer Singh From Their Ranthambore Trip Goes Viral.

Being an active user of social media Neetu Kapoor's daughter Riddhima Kapoor Sahni, shared the pictures of the squad from the trip earlier, which revealed that Ranveer Singh was also a part of it.