Rhea Kapoor shared an amazing picture of her in a bikini with a saying by Tina Fey. It's her at 28. The picture is drawing a lot of attention on Instagram with friends loving her look while fans are cheering her for a perfect body. 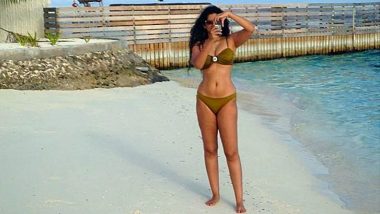 Rhea Kapoor has posted something a few hours back on Instagram which is getting a lot of appreciation. The picture has her wearing a bikini while clicking a picture, perhaps of the sunset. She looks absolutely amazing. Fit and fab are the two words that perfectly describe it. Now we don't know if it's a recent picture or an old one, but it is surely garnering a lot of love. Jacqueline Fernandes has called it the hottest bod she has seen in a while, her boyfriend Karan Bhoolani has the most amazing reaction. Neena Gupta Asks Google to Reduce Her Age After Donning a New Hairstyle, Ashwiny Iyer Tiwari, Rhea Kapoor Love Panga Actress’ New Look (View Pic)

Rhea captions it with a Tina Fey saying. She writes, "28. I thought I was fat. We can never win with ourselves can we? But we can try. Like Tina Fey says “If you retain nothing else, always remember the most important rule of beauty, which is: who cares?" That's so true!

Rhea had confirmed that there will be a sequel to Veere Di Wedding which will see the return of Swara Bhaskar, Sonam Kapoor, Kareena Kapoor Khan and Shikha Talsania.

(The above story first appeared on LatestLY on Mar 11, 2021 08:16 PM IST. For more news and updates on politics, world, sports, entertainment and lifestyle, log on to our website latestly.com).