We decided to revisit some of the Bollywood trailers of 2021 of films starring Salman Khan, Ajay Devgn, Sara Ali Khan, Akshay Kumar, Dhanush, and more, and see how quite a few of them did try to trick us about the plotlines. Whether they worked or not, let's check out below. 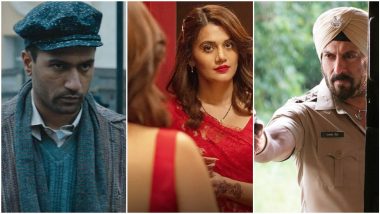 Recently we read about this interesting lawsuit that two fans of the actress Ana De Armas filed against the makers of the 2019 Danny Boyle movie Yesterday. Their consternation was that the trailer of the film featured Armas, who had a cameo in the film, and she was not there in the movie, her role being edited out. This for them, amounts to cheating. While we are not making any comments on whether Yesterday did cheat the fans, it is no secret that there are many trailers known for tricking fans with scenes and plotlines that aren't in the final movie. Ana de Armas’ Fans File a Federal Class-Action Lawsuit Over Actor’s Role Being Cut From 2019 Film Yesterday.

Case in point, the money shot in Avengers: Infinity War of some of the Avengers running towards the screen during the climactic Wakandan war, which wasn't there in the movie. Or James Franco being promoted in the marketing material of Alien: Covenant, but only has a half a glimpse in the movie. Or that of Spider-Man and Iron Man flying together through the skyline of New York in the trailer of Spider-Man: Homecoming that wasn't seen in the movie.

Ultimately it is on the directors on how they manage to make the deception feel clever or not. Like, while we are were a little shocked as to why the running scene wasn't there in Avengers: Infinity War, the trick worked in hiding about Bruce Banner-Hulk equation. But Franco's, and for the matter even Noomi Rapace's less-than-minimal presence in Alien: Covenant was annoying.

Looking closer home, we decided to revisit some of the Bollywood trailers of 2021 and see how quite a few of them did try to trick us about the plotlines. Whether they worked or not, let's check out below. Some SPOILERS ahead!

How It Tricked Us: By not telling us that it is a ripoff of The Godfather

Mahesh Manjrekar's delayed gangster drama, starring Vidyut Jammwal, Shruti Haasan and the director himself, had its trailer convey that it is about two lovers who end up battling each other in the crime wars. While that did happen in The Power, what it doesn't tell us is that the movie is yet another Hindi rip-off of The Godfather, joining the ranks of Dharmatma, Aatank Hi Aatank and Raajneeti. At least, Jammwal's other movie of 2021 - Sanak - gave us the idea that it is ripping off Die Hard in its trailer. Not that we have forgiven it for that. The Power Movie Review: Vidyut Jammwal, Shruti Haasan Engage in a Tedious Powerplay in Mahesh Manjrekar’s Tepid Remake of The Godfather.

Did it Work?: Unless you are okay with Mahesh Manjrekar fulfilling his fantasy of playing Don Corleone, no, it didn't!

How It Tricked Us: A Political Drama Inspired by BSP leader Mayawati's Life

Did it Work?: Plotwise, I didn't mind the transition. But the film didn't have the chops to sustain the viewer interest.

How It Tricked Us: By Hinting at the Intimacy Between The Lead Couple

What? A Bollywood movie with two good looking people in the lead, and there is no love story between them? And it is good too? Well, Dibakar Banerjee's dark thriller avoided going the cliched route of making their leads get intimate with each other while on the run, though certain portions of the trailer trick us into thinking it would happen. While the movie hints that they may have feelings for each other in the end, SAPF thankfully doesn't get it evolved beyond that. In fact, the trailer hides the fact that Parineeti Chopra's character is pregnant, and, yes, Arjun Kapoor's character is not the father. Sandeep Aur Pinky Faraar Movie Review: Parineeti Chopra and Arjun Kapoor Subvert Your Expectations in Dibakar Banerjee’s Dark Thriller.

How It Tricked Us: A Sexy Black Comic Thriller with Pulp Elements about Lust, Deceit and Murder

Whatever scenes gave us the above perception in the trailer was in the movie, but Haseen Dillruba, starring Taapsee Pannu, Vikrant Massey and Harshvardhan Kapoor, is more serious than the trailer suggested. It is a dark love story that rises out of the deception exposed over a physical extra-marital affair, with some elements of the relationship do sounding toxic enough. The comic elements were all done and dusted in the first act itself. Haseen Dillruba Movie Review: Taapsee Pannu, Vikrant Massey and Harshvardhan Rane’s Twisted Love Triangle Is Quite a Drag!

Did it Work?: The movie had its issues and the trailer is deceptive, but the dark tone didn't feel out of place in the movie.

How It Tricked Us: By Not Revealing What an Editing Mess It is!

The only problems we thought the movie would have when watching the trailer was that some of the VFX didn't look good and the over-jingoism. Who could really tell that this trailer hid one of the worst movies of 2021, if not the WORST? At least, Satyameva Jayate 2 trailer warned us how bad it would turn out to be! Bhuj - The Pride of India Movie Review: Ajay Devgn’s War Drama Is Cacophony of Loud Jingoism, Bad Editing and Direction.

Did it Work?: ZERO points for not forewarning us!

How It Tricked Us: By Not Revealing It is More of a Freedom Fighter Biopic Made For Global Audiences

Shoojit Sircar's film is a biopic alright, but it isn't the freedom fighter biopic we are so used to. There is no jingoism, no goosebump inducing scenes to invoke patriotism,and there is more English than Hindi and Punjab being spoken in the movie. In fact, this is a non-linear slow-moving movie that, through Udham Singh's dogged motivation to kill O'Dwyer is the exploration of the horrors of the Jallianwala Bagh massacre, which the movie only reveals in the final act. And yes, Sardar Udham is a subtle insight into how our post-freedom rulers have used the same tactics as the British, and how nothing has changed much for the common man, even when the nation has sprung ahead. If this part was shown in the trailer, then pitchforks would have been raised for the makers, right? Sardar Udham Movie Review: Shoojit Sircar’s Biopic, Starring Vicky Kaushal, Fails to Engage With Its Languorous Storytelling.

Did it Work?: While our review was critical of the movie, there is no denying its technical brilliance and the impact of its haunting third act. Also, Sardar Udham did find itself in the list of many critics' best films of 2021.

How It Tricked Us: By Making it a Salman vs Aayush Muscle-Match!

If you knew beforehand that Antim was the remake of the Marathi film Mulshi Pattern, you know that the movie is primarily the story of the rise and fall of Aayush Sharma's character as a gangster in Pune. The trailer makes it look like this is a Salman Khan taking on Aayush's gangster, and while the movie does have them share verbal and physical spats, Salman's character feels superficial to the plot that has more to do with Aayush. The superstar's presence in the movie is clearly the role being expanded to match the star-power.

Did it Work?: Antim is Salman Khan's lowest grossing film in 13 years. Does that answer your question? Antim Box Office: Salman Khan Scores His Lowest Opening Weekend Collection in 12 Years - Here's What Happened!

How It Tricked Us: By Avoiding to Tell Us Its Time Setting

Maybe it has to do with Abhishek Bachchan's casting, but we had this perception that Bob Biswas would be the prequel-spinoff of Kahaani, about how Bob Biswas became well, the most unassuming but chilling assassin. Considering we all thought Bob Biswas died in Kahaani, right? Right?

Did it Work?: Funny part is even after watching the movie, I am not sure what the movie is supposed to be- prequel, sequel or a film set in an alternate universe? Any answers there? Bob Biswas Ending Explained: 5 Questions the Sequel to Abhishek Bachchan’s Kahaani Spinoff Must Answer if It Ever Gets Made!

How It Tricked Us: A Love Triangle about Dhanush's Tamilian, Sara Ali Khan's Bihari rebel and Akshay Kumar's magician

The title should have been hint enough, and if not that, the fantastical light in which the trailer painted Akshay Kumar's magician character should have also have been a clue. Otherwise tha trailer played the movie as if it was an upgraded version of Abhay Deol-Soha Ali Khan-Shayan Munshi-starrer Ahista Ahista. Atrangi Re Movie Review: Dhanush and AR Rahman Own This Floundering Unusual Love Triangle, Co-Starring Akshay Kumar and Sara Ali Khan.

Did it Work?: We don't blame the trailer for hiding its mystery plot point. But Akshay's casting as the young girl's supposed lover made people doubt about the form in which he would appear, and many had already predicted he could be a figment of imagination for Sara Ali Khan's character. A younger actor might have reduced the suspicions.

(The above story first appeared on LatestLY on Jan 27, 2022 08:33 PM IST. For more news and updates on politics, world, sports, entertainment and lifestyle, log on to our website latestly.com).