The Power is a gangster drama directed by Mahesh Manjrekar and is an unofficial remake of The Godfather. The movie stars Vidyut Jammwal, Shruti Haasan, Mahesh Manjrekar, Jisshu Sengupta, Sachin Khedekar, Sonal Chauhan, Prateik Babbar and Yuvika Choudhary. The Power is streaming in Zee Plex on pay-n-watch basis. 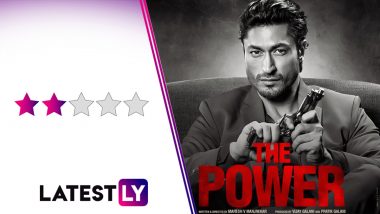 The Power Movie Review: Okay, Mahesh Manjrekar's much-delayed gangster thriller The Power is a straightaway ripoff of The Godfather. But without the iconic bits like that severed-horse-head-on-the-bed scene, of course. Instead, while movie buffs can see this remake as a sacrilege in itself, the utmost praise that I can put upon this film, starring Vidyut Jammwal and Shruti Haasan) is that it is not a steaming pile of horse-shit like, say, Aamir Khan's terrible Aatank Hi Aatank. But then, it is also nowhere in the league of even Ranbir Kapoor's Raajneeti or Amitabh Bachchan's Sarkar, forget the Coppola classic. The Power: Vidyut Jammwal, Shruti Haasan’s Film to Release on Pay-Per-View Service ZeePlex on January 14.

Unlike Rajneeti or Sarkar that only use influences of The Godfather, The Power liberally borrows the plot. So we have our desi Don Corleone in Kalidas Thakur, played by director Mahesh Manjrekar himself, a feared but principled crime-lord and a family man. Instead of three sons and one daughter, he has two sons and one daughter. The hot-headed eldest son Ramdas (Jisshu Sengupta) is married to Shaila (Yuvika Choudhary), a wily woman straight out of a K-serial. Her brother, the opportunistic Ranjith (Prateik Babbar) - the movie's stand-in for Fredo Corleone and Carlo rolled into one - is married to Kalidas' daughter.

Kalidas' younger son, Devidas aka Devi (Jammwal) has been kept away from the family's crime operations and is aspiring to be a chef in Singapore (maybe, the movie's tribute to Akshay Kumar). Of course, apart from culinary skills, Devi is also a trained martials arts personnel with a flair for bad Ghalib. The rest of the plot is more or less a familiar retread of Corleone's, sorry the Thakur's clash with rivals and new players in the field, followed by betrayals, bloodshed and Vidyut's brawn power.

While I am appalled that Manjrekar dared to even touch a much revered film without thinking of copyright hassles, at least he does make the first half of The Power reasonably engaging. Even with the familiarity, these portions work because of the pacing and because, let's face it, The Godfather's premise can make even a bad remake like Aatank Hi Aatank just about bearable.

Of course, the little clinks that made The Godfather so great is blunted here, with the characters merely going through the motions, while the plot becomes more of an excuse for a stiff Jammwal to jump from one slo-mo action set-piece to another. His Devi lacks the depth of what made Michael Corleone such a great anti-hero, and is written in a very weak manner.

Unlike Michael who hesitantly became his father's successor over circumstances, Devi easily takes up his father's operations, after Kalidas gets seriously injured. And even after being the leader, we never see the cunningness from the character that made the original inspiration look more strategic than his father. It is under Devi's very nose that his family keeps getting attacked and members killed, nor can he sense the traitor in his fold, even when Prateik Babbar's incessant hamming should have been a clue. Vidyut Jammwal Eager to Meet His Kolkata-Based Fan Krishna Sonkar, Who Inked Commando Star’s Face on the Chest.

We wonder if Ramdas - perhaps, the film's most interesting character - would have been a better choice to be the successor. At least Jisshu Sengupta seems to be having fun with the role, and The Power takes a total dive to depths after he is written off.

One subplot that keeps The Power from being not 'The Godfather' is Devi's relationship with the remake's version of Kay, Parveen (Shruti Haasan). Parveen is the daughter of Anwar (Zakir Hussain), Kalidas' trusted aide and is Devi's childhood friend and lover. While Kay was more of a wronged partner for Michael, Parveen gets to do more as she later is involved in revenge drama against the Thakurs. But doing more doesn't make her a better character, as this subplot makes the film even more tedious in the second half, not helped by Shruti Haasan's terrible performance. Adding a love triangle involving an actress Chandni (Sonal Chauhan) - the most unfortunate character in the film - things go further limp. Plus, Devi's snide treatment of Chandni makes him a real douchebag.

All these lead to a silly climax that totally destroys one of the most fantastically shot finales ever shot in cinema, though Manjrekar gets to make his Don Corleone go beyond the scope of the character and get into Sarkar Raj territory. None of the villains, including a wasted Sachin Khedekar's Rana, make an impactful mark.

- An Engaging First Half

- A Harried Second Half With Pacing Issues

To rephrase Don Corleone's popular quote from The Godfather, we wish someone made Mahesh Manjrekar an offer that he couldn't refuse and not touch the classic. If the original was a scrumptious paella prepared in fine olive oil, the remake feels like someone mixed burnt rice and chewy prawns in stale oil. The Power is streaming in Zee Plex on pay-n-watch basis.

(The above story first appeared on LatestLY on Jan 14, 2021 01:01 PM IST. For more news and updates on politics, world, sports, entertainment and lifestyle, log on to our website latestly.com).