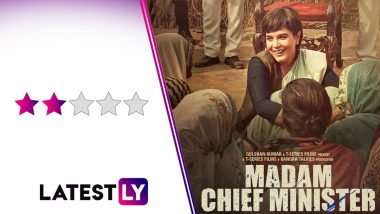 Madam Chief Minister Movie Review:  Madam Chief Minister, directed by Subhash Kapoor, is about the rise of Tara (Richa Chadha), a Dalit woman, in the political rankles to be the Chief Minister of Uttar Pradesh. Whether it is her caste identity or her fake hairdo that makes Richa's character feel inspired by a certain former CM of the state is contentious, just like what the film makes you think about itself. You think it is going to be a pseudo biographical political drama, you would be surprised when Madam Chief Minister turns out to be a twisty affair that even Abbas-Mustan would be jealous of. Alas, only if twists were enough to make for a good movie. Madam Chief Minister: Richa Chadha Catches Up With the Instagram Trend, Reacts to the Backlash With an Amusing Reel!

When she was born, Tara narrowly escapes from being a victim of infanticide by her grandmother, though her birth is blamed for the death of her father at the hands of upper caste community. Years later, we see Tara working as a librarian at a university, where she is having a clandestine affair with Indu Tripathi (Akshay Oberoi), a budding politician from a powerful family. The affair, however, goes sore with Indu sending his men to kill Tara.

To Tara's rescue comes Masterji (Saurabh Shukla), a revered idealistic leader of the lower-caste communities. Masterji takes the roguish, potty-mouthed Tara under his wings and makes her fight the assembly elections where she defeats the sitting CM. His decision to make her the next CM doesn't go down well with his party members and coalition partners, but Tara becomes the darling of the masses with her fiery speeches and her work.

But the story doesn't end here, as Madam Chief Minister moves beyond the usual political drama to become a twisty thriller. I won't say much on this, but the narrative is filled with enough surprises, right from the interval point that brings a major death. More on this, later.

As a political drama, Madam Chief Minister draws its inspirations from real-life political events ruling the most happening state in this country. With UP Government going against series like Tandav and Mirzapur for showing the state in poor light, I am curious as to how Madam Chief Minister would be received now. Considering the reach of theatres is lesser in these COVID-19 times compared to OTT, I expect the noise to be lesser. Though, Madam Chief Minister has already seen its own controversy for its poster where it was called out for stereotyping Dalits by having its protagonist hold a broom.

It was an uncalled-for controversy, since in the film, we only see Tara hold the broom a couple of times. The political drama, however, had certain other sequences and dialogues that make you chuckle wryly. In what I think is the best quote from the film, an upper-caste politician (Subhrajyoti Barat) tells his acolyte that it is not who builds metro whio gets the votes, but those wants to built a mandir. Words like 'Vikas', 'Gathbandhan', 'Chanakya' are thrown about, as Madam Chief Minister tries to be relevant in the present circumstances. As a safe measure, though, the film is set before the present administration, so there's that. Madam Chief Minister: Richa Chadha Opted for a Wig Instead of Chopping Her Hair for Her Character and It Has an Ali Fazal Connection to It.

After a ho-hum first act, made only better by scenes between Masterji and Tara, the movie picks up pace when Tara becomes the Madam Chief Minister. The political machinations shown thereafter, sadly, doesn't sustain a consistent impact throughout. The sequence where Tara meets her former lover for the first time after becoming the CM is nicely done, and so is the shootout scene at a tourist home, when Indu and his men attack her and her guards.

At the same time, the confrontational drama between Masterji and Tara feels contrived. The 'breaking bad' transition for Tara as she goes beyond the idealism of her mentor, and how Masterji's character gets underused afterwards suffers from weak writing. Considering Masterji was such a good character, the movie deserved more of him as a reflector to Tara's rise. Instead, Madam Chief Minister relies on twists and turns, losing the subtleties of its caste politics and becoming more of a Sidney Sheldon story. In my humble opinion, the screenplay of Madam Chief Minister could have worked wonders if it was adapted as a series, that would have helped in developing the characters, and turning some into cult ones, like, for example, Indu or even Tara's loyal cousin and lieutenant, Babloo (Nikhiil Vinay). In the film, however, they don't leave much of an impact despite the potential.

It also doesn't help much that Subhash Kapoor's old-school treatment robs the film of an appeal it deserves. The movies also keeps losing its pace, especially in the second hald.

The performances do not disappoint, though. Richa Chadha, despite fit with a very distracting wig, displays enough gusto in an author-backed role. Saurabh Shukla is excellent, as always, and every scene featuring these two actors are so nice to watch, even if the writing doesn't exactly support them.

Manav Kaul does well as Tara's PA turned husband, while Akshay Oberoi's haughty performance shines in the first half (but gets less scope in the second). Thankfully, Madam Chief Minister avoids other obstinate cliches associated with films based in this setting, like tiltillatory sequences (save for a couple of kissing scenes) and item songs.

PS: Whoever cut the trailer of the film should be lauded. Held back quite a few good surprises that made the movie engaging enough to be a decent watch.

- The Second Half Sacrifices Character Development for Twists

Madam Chief Minister has plenty of surprises in its kitty, along with good performances from Chadha and Shukla. However, it is underwhelming as a political drama, giving precedence to twists over its (more interesting) political tropes.

(The above story first appeared on LatestLY on Jan 22, 2021 02:24 PM IST. For more news and updates on politics, world, sports, entertainment and lifestyle, log on to our website latestly.com).