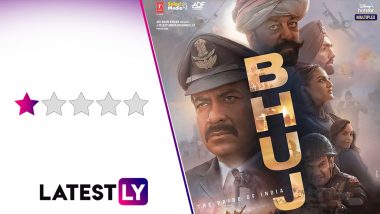 Bhuj - The Pride of India Movie Review: Ajay Devgn produces and stars in Bhuj: The Pride of India, based on the real-life battle that happened near the Bhuj airbase during the Indo-Pak 1971 War. Directed by Abhishek Dudhaiya who is also the writer (along with Raman Kumar, Ritesh Shah and Pooja Bhavoria), the film also stars Sanjay Dutt, Sonakshi Sinha, Ammy Virk, Nora Fatehi, Pranitha Subhash and Sharad Kelkar. Aseem Bajaj is the cinematographer, Dharmendra Sharma is the editor, while Amar Mohile has composed the background score for Bhuj. Bhuj - The Pride of India: Ajay Devgn Meets Defence Minister Rajnath Singh, Thanks the Latter for His Time and Encouragement.

Bhuj - The Pride of India begins with Ajay Devgn narrating how the 1971 liberation of Bangladesh war happened, and how this resulted in Pakistan Air Force attacking several air-bases in Western India including Bhuj. With the flying strip severely damaged, it is upto Squadron Leader Vijay Karnik (Ajay Devgn) to restore the strip with the help of the local villagers, led by a fierce Sunderben (Sonakshi Sinha), so that the Indian Army can land their troops and fend off Pakistani attack.

Before I sat to watch Bhuj, I got to read this tweet that reminded Bollywood about how August 15 is celebrated for gaining independence from British, and not for beating Pakistan in a war. The context of the tweet is that we have three biggies coming during Independence Day weekend, and two of them - Shershaah and Bhuj - are about wars with Pakistan, while Bell Bottom is a spy thriller that also involves Pakistan. Well, someone tell that Twitter user that Pakistan bashing is exactly what amounts to patriotism these days. Bhuj – The Pride of India Twitter Review: Ajay Devgn’s War Film Garners Mixed Response From Netizens.

And if you are the ones to believe in that sentiment and found Shershaah 'lacking' in that aspect, this hollow excuse of a propaganda-disguised-as-a-war-drama is  just for you. Right from the first scene, Bhuj is clear about its intentions. We have Pakistani army majors proudly boasting their bloodlust by recounting the millions massacred in Bangladesh (then East Pakistan). When told how India has been helping out Bangladesh, the major says 'Yeh wohi Hindustan hai na jaha humne 400 saal raaj kiye the?' (is this the same India that we ruled for 400 years?). Huh?

Of course, if the implication of that statement isn't clear, then a few scenes later, Karnik tells his enemy on the phone that they are descendants of Chhatrapati Shivaji Maharaj who brought down the Mughals to their knees and who rewrote history with his blood. I can hear my WhatsApp uncles clapping over this!

This is just a small dose of the kind of jingoism injected in this film, as this hate-mongering gets better (or worse) ahead. There is another not-so-sly piece of attack where Dutt. who plays RAW informer Ranchordas Pagi (Sanjay Dutt) (who also turns a soldier as per the convenience of the script) tells how we don't allow the killing of innocent animals, and then proceeds to kill Pakistani soldiers over this. Subtle, I must say! Even more 'subtle' is the proud caste identity declarations, of tales of valour and bravery that a particular clan is known for.

Another interesting scene that I want to point out is Devgn's intro for army officer RK Nair. He says Nair, who is a boxer, had defeated a Pakistani opponent to win a title, but then he also lost his heart to a Muslim disabled lady. Why was these two aspects said in the same sentence? Does he believe that Muslims=Pakistan? Like I said before, this is a film for WhatsApp crowd, and that one of the baddies is named Taimur would only make them even more raucous in excitement.

Not just that, nearly every major Hindu God finds a place in the rousing speeches and motivational scenes, that the Mallu in me was annoyed that Nair didn't invoke Swami Ayyappan at any point. I am no religious person, but some inclusion please! BTW, while I like Kelkar and his deep baritone, did the makers not get any Malayali actor for this role? But then no one is playing here as per their ethnicities so accents are all haywire. And it is not just the accents!

Look, I know what I was going to get when I started watching Bhuj: The Pride of India. If the title wasn't a hint enough, the trailer showed enough glimpse of the kind of ramble-rousing film Bhuj would be which would even make Gadar: Ek Prem Katha feel tamer in comparison. Bhuj was going to be a propaganda film made as an excuse to commemorate the heroes of '71 war. Our soldiers truly deserve better than this.

The trouble with Bhuj is that it is no Uri: The Surgical Strike or even Shershaah. There is absolutely no heart in the film, it is very incompetently directed and shabbily edited. The first half felt like random scenes cluttered together, with Devgn's disinterested voiceover trying to help us to understand whatever the heck is going on. There is a Pearl Harbour-like attack scene on the Bhuj strip in the beginning (including couple of shots being directly lifted from the Michael Bay film), but it is so haphazardly cut that the whole sequence felt like a blur, where extras keep running helter-skelter from clearly CGI explosions, while Devgn manages to retain his cool swag even when blasted twice (and only getting a head scratch).  Several major sequences features so many cuts that it is really difficult to make head-or-tail of what's going on.

The rushed pacing not only ruins the flow of the film, but also butches the characterisation of major players, including Ranchordas, Nair, Flight Lt Vikram Singh (Ammy Virk) and even Heena Rehman (Nora Fatehi), who acts as a spy for the Indian army, by honeypotting a Pakistani general and being his wife. If you think Heena's story is interesting, it ends much before the interval point. At least, you can thank your stars that they had the sense to cut off the terrible "Zalima Coca Cola" song that should have had no place in the film to begin with.

Abhishek Dudhaiya's lack of experience in handling such an ambitious film is clearly visible in several scenes. Like there is a sequence where an explosion happens, but the characters have a delayed reaction to it. Or in the climax, Dutt's character single-handedly hacks many Pakistani soldiers (the love for brutality that this film has deserves special mention) but the body count around him doesn't correspond to his kill-count.

Even the whole rebuilding of the air-strip - Bhuj's main plotline - is so dully done and dusted that we don't even get the gauge the dangers involved and the time-frame taken (the real air-base took three days to get rebuilt). The clincher is the climax, though, that involves a military transport plane and a truck that has to be seen to be believed.

While I did feel bad for my eardrums, my senses and what I believe of my patriotism, the worst I felt was for Pranitha Subhash. The actress, who was recently also seen in Hungama 2, played Ajay's wife but looked young enough to be his daughter, and worse, she didn't have a single line in the movie! As for Ajay, it is terrible to see such a good actor backing such mediocrities. If he likes to do patriotic stuff, no qualms! But at least do it better. Like he did with The Legend of Bhagat Singh, years back.

(The above story first appeared on LatestLY on Aug 13, 2021 09:37 PM IST. For more news and updates on politics, world, sports, entertainment and lifestyle, log on to our website latestly.com).