Sardar Udham is a Bollywood biopic on the revolutionary Shaheed Udham Singh, that is directed by Shoojit Sircar. The screenplay is by Ritesh Shah and Shubhendu Bhattacharya. Vicky Kaushal plays the main lead in the movie that is streaming on Amazon Prime Video. 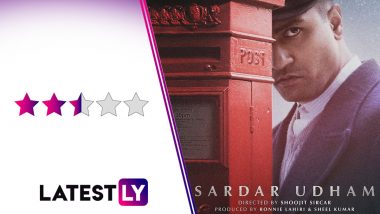 Sardar Udham Movie Review: For a change, let me go straight into the third act of Shoojit Sircar's Sardar Udham and tell you that it is one of the most heartbreaking, the most painful sequences I have seen in a film this year. The 1919 Jallianwala Bagh massacre is one of the most condemned, tragic chapters of our freedom struggle, a searing example of British cruelties meted out on innocent citizens. The event plays an important part in the rise of the revolutionary in Udham Singh, played here by Vicky Kaushal, yet it is only explored (in unflinching brutality) in the last half an hour or so. Sardar Udham: Before Vicky Kaushal's Film, Did You Know Hrishikesh Mukherjee Tried to Make a Movie on The Revolutionary?

Before that, we begin with Udham Singh being released from jail in 1931 for his involvement in the HSRA (Hindustan Socialist Republican Association) party activities. By then, his comrade Shaheed Bhagat Singh is no more and Udham, after shaving off his beard and cutting his hair, escapes to England, where he has only one aim - to assassinate Michael O'Dwyer, the former lieutenant governor of the Punjab, under whose command General Dyer carried out the Jallianwala Bagh massacre. If you know your history, you would know that Udham Singh managed to shoot O'Dwyer, though it took 21 years to achieve that mission. He was later hanged to death by the government for what they saw as a terrorist act, but he continued calling himself a revolutionary to the very end.

But Shoojit Sircar doesn't play his story straightforward. Instead, the director of films like Piku and October takes a rather subtle, a quieter approach to telling Udham's story, often going back and forth. The assassination is carried out within the first 10 minutes or so, and the first hour is spend in seeing how the government reacts to the cold-blooded murder, and the officials there trying to break Udham - whose real name is often in contention, is it Sher Singh, or Ram Mohammad Singh Azad -  brutally.

I feel that Shoojit was rather interested in the psyche, the resilience of the man. We know the story, the director wants us to see how it affected him. So instead of taking the usual bombastic routes - there are only two scenes where we see Udham shout - Shoojit takes a more reserved, colder approach where moments mattered. Like the conversation Udham has with O'Dwyer, while pretending to be his house help, where the latter justifies what happened in 1919. It is a truly anguishing scene, made even more disturbing to recollect when the film shows the massacre and its aftermath in agonising detail after some time. We see the act of revenge first, the anguish behind that only later. Whether it was a suitable approach here is something that depends on viewer to viewer.

At times, I saw influences of Steve McQueen's underrated Hunger in the scenes where Udham languishes in the British jail or when he is being brought for questioning by Inspector John Swain (Stephen Hogan). While these portions excel in their technical brilliance - the production design is fantastic - and Vicky's subtle performance is a plus, the slow pacing annoyingly distances you from the story. The moments that draw you into the film actually come in the flashes of Udham's life back in India, especially the sequences involving Bhagat Singh, with Amol Parashar's casting feeling so apt here.

So does this slow-burn approach work in the favour of the movie? The story is fascinating and hard-hitting, and the movie keeps reminding you of the unapologetic attitude of the British even after being called out for their cruelties. And yet, the offhand treatment doesn't really engage the viewer for such an important story. At times, I also feel that Sircar's target audience is more on a global level than the desi audience, with the manner he treats the premise. Shoojit Sircar on Sardar Udham: I Want the Film’s Message to Go Far and Wide Across the World.

But no matter how you feel about the rest of the movie, the third act drags you back in. We have seen the Jallianwala Bagh massacre enacted in several movies and series, but here Shoojit refuses to move away from showing us the visceral manner in which the protestors were killed, how each bullet tore away into the flesh of men, women and children who were attending the meeting there. And it doesn't end there. The final hour is truly haunting, and makes us understand what made Udham Singh persistent and patient enough to wait for his revenge. Sardar Udham: Vicky Kaushal Shares a Reel vs Real Still From the Film, Applauds Shoojit Sircar for Recreating Scenes So Aptly.

- The Slow Pacing and the Distanced Approach

Sardar Udham has the makings of a masterpiece - be it in the treatment, the premise and Kaushal's subtle performance. The fact that it doesn't turn out to be so, is what is the most disappointing aspect about the movie. Sardar Udham is streaming on Amazon Prime Video.

(The above story first appeared on LatestLY on Oct 16, 2021 12:12 AM IST. For more news and updates on politics, world, sports, entertainment and lifestyle, log on to our website latestly.com).