Starring Sunny Kaushal, Radhika Madan, Mohit Raina and Diana Penty in key roles, the film premiered on Disney+ Hotstar today (October 1). The film tells the story of Kartika and Jaggi, two pure souls who are smitten by each other, but are torn apart by destiny. 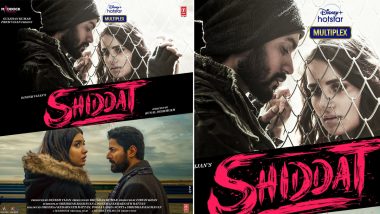 The team of Shiddat has been making all the right kind of noises ever since its announcement. Starring Sunny Kaushal, Radhika Madan, Mohit Raina and Diana Penty in key roles, the film premiered on Disney+ Hotstar today (October 1). The film tells the story of Kartika and Jaggi, two pure souls who are smitten by each other, but are torn apart by destiny. Director Kunal Deshmukh has earlier revealed that he wanted to craft a musical love story for quite a while, where songs bring you closer to the characters and Shiddat has made sure that dream comes true. Shiddat Movie Review: Sunny Kaushal Shines With His Sincerity And Spontaneity!

The film has been the talk of the town for its music, its promos and the chemistry between the main leads, but did the story of the film manage to impress the critics? Let's find out!

News 18: "Great film romances have the power to make a cynical viewer believe and become so invested in the characters on screen as to yearn for their union. Shiddat somewhere does it but gets lost in its convoluted plot. The film would have still made the cut had director Kunal Deshmukh not stretched the plot beyond a point and not created a melodrama. He manages to exude a likeable chemistry between Sunny and Radhika - they look comfortable with each other even in the most awkward scenes."

NDTV: "Shiddat tries exceedingly hard to pass itself off as a modern, progressive love story about an independent girl who believes in living on her terms. But that is a losing battle because the boy who forces her hand is somebody who needs urgent counselling. Jaggi hopes to land a stable job if he breaks into the national hockey team. But we do not see him do anything concrete in pursuit of that goal."

Scroll.in: "Shiddat, one of whose meanings is undying dedication, is the latest ode to young and “true” love, the kind that involves extreme measures and the near-erasure of the self. One of its songs is even called "Barbadiyaan": annihilation. The best thing about Mahesh Bhatt alumnus Kunal Deshmukh’s overblown movie is the complete embodiment of this emotional state by its leading man. Sunny Kaushal enters Shiddat as a bratty wedding crasher and exits it on a note of grace, emerging as the film’s throbbing heart."

Times Of India: "The major problem with ‘Shiddat’ is that it’s an exciting idea on paper that tends to drag in execution, especially in the second half. The story is highly unrealistic at times and preposterous too, but what keeps it going is the sense of volatility and suspense. However, it’s true that in today’s world of realistic cinema, we often don’t get to see completely mad, raw and defiant love stories. This one goes there with Shiddat, but doesn’t leave you deeply moved."

India Today: "For Shiddat, the fault lies in that there is emphasis placed on melodrama and forced dialogues. But the acting of the actors somehow makes up for that. Sunny Kaushal’s dialogue deliveries and convincing performance will win your heart. Though Radhika Madan and Diana Penty get extremely limited screen time in comparison to their male counterparts, the ladies leave a mark as free-spirited, practical and open-minded women. And lastly, Mohit Raina, without whom Shiddat would have looked like another failed attempt to remake DDLJ (Dilwale Dulhania Le Jayenge)."Shiddat Title Track: ‘Manike Mage Hithe’ Singer Yohani Croons the Female Version of Sunny Kaushal, Radhika Madan’s Song.

Prathamesh Jadhav from Latestly also happened to watch the film and said, "The movie makes you laugh, it certainly makes you cry despite the broad strokes in which it is narrated with the preposterous and the predictable elements galore! Watch Shiddat for Sunny Kaushal and Mohit Raina. If you are a sucker for old-school romance with all the predictable elements factored in, then this one will not let you down!"

(The above story first appeared on LatestLY on Oct 01, 2021 10:35 AM IST. For more news and updates on politics, world, sports, entertainment and lifestyle, log on to our website latestly.com).