Shreyas Talpade Birthday Special: From Dor to Iqbal - Taking a Look at 5 of his Best Performances

Here's appreciating his acting proficiency and wishing him a very happy birthday. 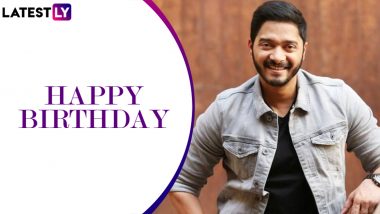 Shreyas Talpade celebrates his 44th birthday today and we have all the good reasons to dance with joy. The Golmaal Again actor is often appreciated and praised for his brilliant comic timing. However, that's not the only qualification of an actor within him. The actor has already proved his acting proficiency in movies like Iqbal, Dor and Welcome to Sajjanpur. While the comic hero in him will never die, we hope filmmakers give him enough scope to shine in other genres as well. Shreyas Talpade Reveals the Reason Why He Did The Lion King and It’s Super Adorable.

As the actor gears up to ring in his special day, we decided to pick five of his best performances that we will personally cherish forever. From playing a deaf and mute boy in Iqbal to an impressionist in Dor, the actor has enough accolades and performances to register under his kitty and also enough reasons to be proud of. Let's have a look at some of his stellar performances.

A deaf and mute village boy who aspires to be a part of the Indian cricket team one day. One of the brilliant projects to come out of Nagesh Kukunoor's camp, Iqbal still dominates our list of Shreyas's best projects. His innocence and determination to live his dream were a class act.

Golmaal as a franchise is a laughter riot in itself. But Golmaal Returns probably stands tall over other releases in this series. Shreyas plays Laxman Prasad who meets Ajay Devgn's Gopal and helps him weave a web of lies. Their camaraderie is outstanding and so is Talpade's comic timing.

He was Shah Rukh Khan's best friend, who stuck with him through thick or thin. The actor was even nominated in the Best Supporting Actor category at Filmfare Awards, Stardust Awards, Zee Cine Awards and IIFA Awards.

Another Nagesh Kukunoor wonder that had Shreyas Talpade play an impressionist. He had a crucial role to play in this remake and his acting talent was at display throughout. Dor is easily a very bright and heavy feather in the actor's already coveted hat.

Shreyas played Sanjay Mishra, an ambitious youth and politician. A movie that revolved around two different worlds and two different mentalities was woven together with direction's vision and a plot that eventually made sense towards the climax.

(The above story first appeared on LatestLY on Jan 27, 2020 08:45 AM IST. For more news and updates on politics, world, sports, entertainment and lifestyle, log on to our website latestly.com).