Bollywood actor Sooraj Pancholi has filed a case at the Versova police station over being linked to the death case of Sushant Singh Rajput. Read on. 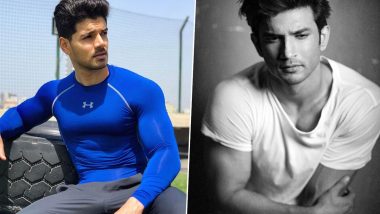 Bollywood actor Sooraj Pancholi has filed a case at the Versova police station over being linked to the death case of Sushant Singh Rajput. The Dil Bechara actor died on June 14, 2020, and in the wake of his untimely demise, many conspiracy theories started floating in the media and online. Earlier to this, Sooraj had slammed the media and others for associating his him to the suicide case of Sushant and his ex-manager Disha Salian. And now, the actor has finally taken the legal route. Sushant Singh Rajput Case: Sister Shweta Singh Kriti Prays for a 'Positive Outcome' Ahead Of The Supreme Court Hearing (View Tweet).

For the unversed, Pancholi is already fighting with the court for justice over the Jia Khan suicide case from many years. According to the theories doing rounds, it was Sooraj who had thrown a bash a night before the SSR died. Speculation also claims that Sooraj was part of Sushant and Disha's friend's gang. However, the actor has denied all such theories.  Sushant Singh Rajput’s Sister Shweta Singh Kirti Pens Cryptic Instagram Post Ahead of Rhea Chakraborty’s ED Inquiry

Mumbai: Actor Sooraj Pancholi (in file pic) files a complaint at Versova Police station over he being linked to #SushantSinghRajputDeathCase pic.twitter.com/X3WTz7Vvfv

Earlier, in an interview to India Today, Sooraj had said, “I have done everything possible to get my first film. So, this is my passion and I’m not going to give up that easy. And these people who are talking about me should have some sense and should have some kind of humanity. Because yeh fair nahi hai. They are destroying my life. I don’t know whether Sushant committed suicide or not. I don’t know. But these people will definitely drive me to commit suicide. I would like to say that”

Meanwhile, Sushant Singh Rajput's case is currently handed over to the CBI wherein the prime accused Rhea Chakraborty has asked for its transfer from Patna to Mumbai. Stay tuned!

(The above story first appeared on LatestLY on Aug 11, 2020 02:08 PM IST. For more news and updates on politics, world, sports, entertainment and lifestyle, log on to our website latestly.com).