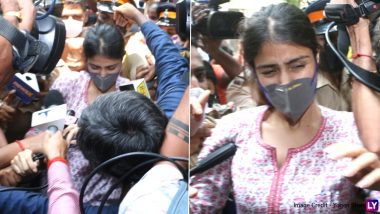 Mumbai, Sep 6 (IANS) Bollywood actor Rhea Chakraborty, who was steeling herself for possible arrest by the NCB on Sunday, was allowed to leave the anti-narcotics agency's office here after a gruelling six-hour-long session of questioning. She is likely to be summoned again on Monday as the National Control Bureau (NCB), which has arrested her brother Showik on Friday, continues its investigations in the drugs angle emerging in the Sushant Singh Rajput case. As per preliminary information, Rhea was mostly questioned by the NCB sleuths on the narcotics angle now shrouding Sushant's death. Sushant Singh Rajput Death Case: 'Rhea Chakraborty Is Ready For Arrest', Actress' Lawyer Satish Maneshinde Releases Statement.

Rhea, who did not appear to be flustered as she stepped out, underwent interrogation by several teams of NCB sleuths at the agency's Zonal Office on the third floor of the Exchange Building in Ballard Estate, before they finally permitted her to go home after 6 p.m. in her own vehicle. Sushant Singh Rajput Death Case: Rhea Chakraborty Summoned by Narcotics Control Bureau, Asked to Appear Today.

Earlier on Sunday, an NCB team including Sameer Wankhede, who is heading the investigation, and a woman official had gone to pick up Rhea at her home in PrimRose Apartments in Santacruz but she opted to go in her own car along with a Mumbai Police escort, amid speculation that she would be arrested. Rhea Chakraborty's Father Retd Lt Col Indrajit Reacts to Son Showik's Arrest by NCB: 'Congrats India, You Have Effectively Demolished a Middle-Class Family'.

The 28-year old actress, who has already been questioned by the Central Bureau of Investigation and Enforcement Directorate, reached the NCB office for questioning, a day after her brother was sent to NCB custody till September 9. Besides Showik, Sushant's house manager Samuel Miranda, domestic help Dipesh Sawant, and drug peddlers Abdel Basit Parihar and Zaid Vilatra are also in NCB custody.

In a statement, released through her lawyer Satish Maneshinde, Rhea said she was "innocent" and would fully cooperate with the investigations. "Rhea Chakraborty is ready for arrest as this is a witch-hunt and if loving someone is a crime, she will face the consequences of her love," Maneshinde said. He added that being innocent, she has not approached any court seeking anticipatory bail in all the cases foisted by Bihar Police, now with the CBI, the ED and the NCB.

In a statement late on Saturday, Rhea and Showik's father, Lt Col Indrajit Chakraborty (retd) condemned his son's arrest by the NCB. "Congratulations India, you have arrested my son, I'm sure next on the line is my daughter (Rhea) and I don't know who is next thereafter," he said. "You have effectively demolished a middle-class family. But of course, for the sake of justice, everything is justified. Jai Hind," said the retired army doctor.

In its remand plea for Showik on Saturday, the NCB had hinted that Rhea would be summoned to join the probe as the agency hopes to "uproot the drugs citadel of Bollywood and Mumbai". Though Rhea had earlier denied consuming drugs, she had reportedly admitted that Sushant used to take marijuana and despite her efforts, she could not control him.

(The above story first appeared on LatestLY on Sep 06, 2020 08:21 PM IST. For more news and updates on politics, world, sports, entertainment and lifestyle, log on to our website latestly.com).