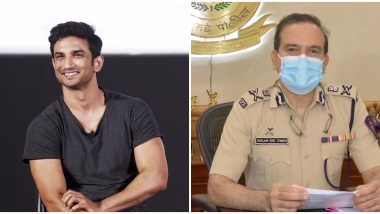 Sushant Singh Rajput died by suicide on June 14. Preliminary investigation has ruled out any foul play. Mumbai Police is investigating the circumstances that pushed him to take the drastic step. An FIR has been filed against Sushant's girlfriend Rhea Chakraborty and 5 other people in Patna, by the late actor's father KK Singh. Earlier, Sushant's psychiatrist Susan Walker disclosed to the media that the actor was suffering from depression and bipolar disorder. She was criticised by many, including the deceased's sister, for breaking the patient-doctor confidentiality. Now, Mumbai Police has also confirmed that the actor was suffering from serious mental health problems. Sushant Singh Rajput Death Investigation: Bihar Police Reveal Sim Cards Used By Late Actor Were Not Registered Under His Name; To Now Pull Call Records (View Tweet).

In a conversation with ANI, Param Bir Singh, Mumbai Commissioner of Police, said: "It has come to surface that he had bipolar disorder, he was undergoing treatment and taking medicines for it. What circumstances led to his death is the subject of our investigation." Fact Check: Not Rhea Chakraborty, It Is Disha Patani in This Viral Picture With Aditya Thackeray.

Police have recorded statements of 56 people and are investigating all the possible angles including financial and rivalry.

It has come to surface that he had bipolar disorder, he was undergoing treatment and taking medicines for it. What circumstances led to his death is the subject of our investigation: Param Bir Singh, Mumbai Commissioner of Police on #SushantSinghRajputDeathCase https://t.co/B0truatyap

Due to the FIR filed against 6 people in Patna, Bihar police had landed in Mumbai for investigation. There were reports that Mumbai Police is not cooperating with Bihar Police. Bihar Director-General of Police (DGP) Gupteshwar Pandey alleged that IPS officer Vinay Tiwari was forcibly quarantined by BMC in Mumbai. Bihar Chief Minister Nitish Tiwari has said that it is not a political matter and Mumbai officials are only carrying out their duty. BMC also issued a statement clarifying that Tiwari was quarantined as per state guidelines since he travelled on a domestic flight.

Mumbai police have also pointed out some discrepancies Bihar's Police's claims about Sushant's money. Mumbai Police Commissioner said, "Bihar Police FIR says Rs 15 cr were siphoned off from Sushant's account. During the probe, we found he had Rs 18 cr in his account of which around Rs 4.5 cr are still there. Till now no direct transfer to Rhea Chakraborty's account found." But he added that they are still probing this angle.

"Sushant's father, sister and brother in law's statement were recorded on June 16. At that moment, they didn't raise any suspicion neither they complained about any lapse in our investigation," Parambir added.

Police has also added that there is no connection between Disha Salian and Sushant Singh's death. Disha was Sushant's former manager, who also died eight days before him. Circumstances of her death were also questionable.

(The above story first appeared on LatestLY on Aug 03, 2020 02:01 PM IST. For more news and updates on politics, world, sports, entertainment and lifestyle, log on to our website latestly.com).