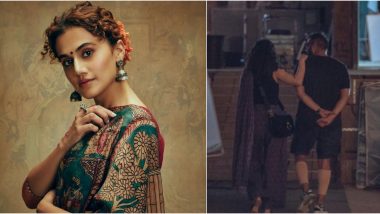 Amid sexual harassment allegations against Anurag Kashyap, Bollywood actress Taapsee Pannu shared a post with a picture of the duo, calling him the 'biggest feminist' she knows of. It looks like with this post, Taapsee has indirectly come out in defence of the filmmaker, a day after Telugu actress accused him of sexual harassment. Taapsee siding with her Manmarziyaan director wrote,"For you, my friend, are the biggest feminist I know. See you on the sets soon of yet another piece of art that shows how powerful and significant women are in the world you create."Telugu Actress Who Accused Anurag Kashyap of Sexual Misconduct Had Earlier Made Similar Allegations Against Irfan Pathan, Claims Filmmaker Anand Kumar.

The actress shared a picture with the filmmaker whilst coming in support of him. Taapsee's post comes after a Telugu actress on Saturday, September 19 took to Twitter and wrote that the Gangs of Wasseypur director was sexually inappropriate towards her. In her post, the actress tagged Prime Minister Narendra Modi, requesting him to take action against Kashyap after which netizens began to trend #ArrestAnuragKashyap on Twitter. Anurag Kashyap Reacts to Sexual Assault Allegations Against Him by Telugu Actress; Denies the Accusations While Also Taking Digs at His Detractors in Hindi.

For you, my friend , are the biggest feminist I know. See you on the sets soon of yet another piece of art that shows how powerful and significant women are in the world you create :) 🤗

Earlier today, Kashyap responded to the allegations made against him and denied them. The director took to Twitter to respond to the accusations made against him and wrote, "Such a long time was taken to shut me up, never mind. [But] while shutting me up, you lied so much that you dragged other women also in it. Please maintain some dignity madam. All I will say is that all your allegations are baseless." The Telugu actress is expected to soon lodge a complaint against the filmmaker with National Commission for Women.

(The above story first appeared on LatestLY on Sep 20, 2020 12:35 PM IST. For more news and updates on politics, world, sports, entertainment and lifestyle, log on to our website latestly.com).