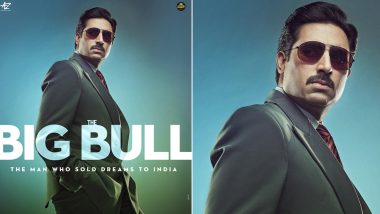 Abhishek Bachchan is back on the screen with a powerful role. The makers of The Big Bull released a new poster that features him in an intense role. Earlier, the makers teased the fans with a silhouette image of Junior AB. The film that is a biographical financial crime-drama is said to be based on the life of Harshad Mehta and his financial crime tales. The makers also revealed the release date which is 23 October 2020. The Big Bull Poster: Abhishek Bachchan Is Imposing And He Wants You To Stay Quiet (View Pic).

Abhishek is seen all suited up and flaunting his dark shades in the new poster. The caption of the picture says 'the man who sold dreams to India.' Of course, not much has been revealed about how exactly the story will look like but this poster promises some serious plotline. Check out the poster below. The story is set in the era of late 90s and early 2000s and the crimes that took place then.

The flick is directed by Kookie Gulati, who earlier directed Vivek Oberoi starrer Prince. The film also stars Ileana D'Cruz, Nikita Dutta and Lekha Prajapati in key roles. Ajay Devgn, Anand Pandit, Kumar Mangat Pathak and Vikrant Sharma are co-producing and presenting the film. Apart from this film, he will also be seen in the spin off of Kahaani, where he will play the role of Bob Biswas. This project is backed by Shah Rukh Khan. He will also be seen in Breathe season 2.

(The above story first appeared on LatestLY on Feb 13, 2020 01:39 PM IST. For more news and updates on politics, world, sports, entertainment and lifestyle, log on to our website latestly.com).