The Big Bull Poster: Abhishek Bachchan Is Imposing And He Wants You To Stay Quiet (View Pic)

Abhishek Bachchan shares a new poster from The Big Bull which is produced by Ajay Devgn. The poster has him in the dark with a finger on his lips. 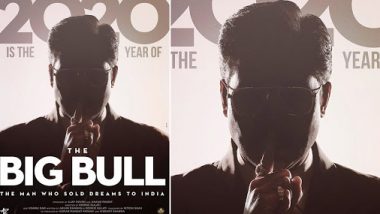 The Big Bull stars Abhishek Bachchan and Ileana Dcruz and is produced by Ajay Devgn. They had announced the film last year which created quite a stir. The film is based on the real-life event of the notorious Harshad Mehta scam in the 90s. They had released an announcement poster too which had a bull on it. Now, Abhishek Bachchan shared a new poster of the film which has him on it. Actually, it has his silhouette while he shushes everyone with a finger on his lips. With neatly parted hair and specs, the figure does look imposing. Remains to be seen what comes of it under the light. The Big Bull: Abhishek Bachchan Drops The First look Of His Upcoming Film; Ileana D'Cruz to Play The Female Lead

Hansal Mehta is also making a web-series on the stockbroker who created chaos in the 90s with financial crimes. The director, however, asserted that the approach to the topic is different in both the projects.

Abhishek surely has good friends who believe in his craft. Besides Ajay Devgn produced The Big Bull, he is also Bob Biswas in a film funded by Shah Rukh Khan. But AB is quite good with biopics...remember Guru?

(The above story first appeared on LatestLY on Jan 02, 2020 12:23 PM IST. For more news and updates on politics, world, sports, entertainment and lifestyle, log on to our website latestly.com).