Can you guess this handsome hunk? 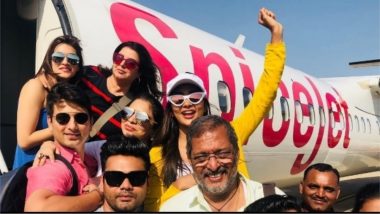 The #MeToo movement in Bollywood is not going to end anytime soon. After Tanushree Dutta accused veteran actor, Nana Patekar of sexual misconduct, many horrifying incidents were highlighted by other victims. Many prominent names in the entertainment industry including Sajid Khan, Vikas Bahl, Subhash Ghai, Kailash Kher, and Subhash Kapoor were accused of heinous acts and strict actions were taken against them by the film fraternity. While Subhash Kapoor was ousted as the director of Gulshan Kumar biopic, Mogul, Nana Patekar, and Sajid Khan willingly decided to quit Housefull 4. The makers were then struggling to find the right contenders until today. #MeToo Impact: Sajid Khan Asked To Explain His ‘Offensive Behaviour’ to Director's Organisation or Face Action!

While we know Farhad Samji has replaced Sajid Khan as the director of Housefull 4, we were curious to know if Anil Kapoor or Sanjay Dutt will step in Nana Patekar's shoes. However, if recent reports are to believe, the filmmakers are keen to replace Nana with Rana Daggubati.  As per Pop Diaries report,  “The name of Rana came as a sudden choice. Rana’s name sounds like Nana, and then the makers decided to ask the south actor if he was keen on working in the film and whether he would have the dates for the same. While Rana seems to have agreed, the paperwork and other details are being worked out at the moment and an official announcement will come soon." The actor is expected to join the cast in the coming weeks. #MeToo in Bollywood: Nana Patekar Responds to CINTAA, Says Allegations Against Him Are Baseless.

Earlier we read reports of Anil Kapoor and Sanjay Dutt being the ideal choice to replace Nana Patekar in Housefull 4. But Rana's name has just piqued our interest in the film and it would be interesting to see him play a comical character. Housefull 4 is all set to release on Diwali 2019.

(The above story first appeared on LatestLY on Oct 23, 2018 11:19 AM IST. For more news and updates on politics, world, sports, entertainment and lifestyle, log on to our website latestly.com).