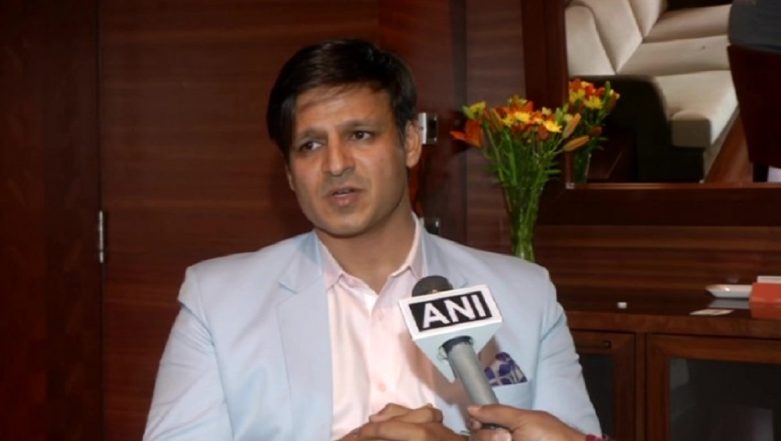 New Delhi, May 20: Actor Vivek Oberoi on Monday said he doesn't see anything offensive in his tweet featuring Aishwarya Bachchan, her daughter, Abhishek Bachchan, and Salman Khan along with him, and will not apologise since he has not done anything "wrong." "Those who are in the meme have no objection while scores of politicians are trying to politicise the issue. They don't work on issues but start their politics on such non-issues. There is a 'Didi' in West Bengal who puts people behind jail for a meme. Now, these people are demanding to put Vivek Oberoi behind bars. They were unable to stop my film and hence are now are trying to put me behind bars," Oberoi told ANI.

Refusing to tender his apologies, Oberoi said: "People are asking me to apologise. I have no problem in apologising, but tell me what wrong have I done. If I have done something wrong, I will apologise. I don't think I have done anything wrong. What's wrong in it? Somebody tweeted a meme and I laughed at it." Vivek Oberoi Shares Distasteful Exit Poll Meme Including Aishwarya Rai, Abhishek Bachchan, Aaradhya, Salman Khan And It's Wrong At All Levels!

Earlier today Oberoi had tweeted a collage of three images featuring him, Aishwarya, Salman Khan, Abhishek Bachchan, and Aishwarya's seven-year-old daughter Aaradhya. The post referred to Salman and Aishwarya's relationship as the 'opinion poll', Vivek and Aishwarya's affair as the 'exit poll' and her current family with husband Abhishek and daughter Aaradhya as the 'final result.' "Is there anything wrong in it? Is there some abuse in it? Is there any obscene picture in it? It is just a creative meme made at the time of elections. I saw it and laughed. I have no problem in saying sorry as I am an expert in saying sorry. But, please, tell me what wrong have I said," said Oberoi.

"I am waiting for the notice from Maharashtra's Women Commission and the NCW. I would also like to meet them and give an explanation because I don't think I have done something wrong," said Oberoi. "I don't know why people are making a huge issue out of it? Someone had sent me a meme which made fun of me. I laughed at it. I appreciated the person for his creativity. If someone mocks you, you should not take it seriously," he said.

Sonam Kapoor was the first celebrity to slam Oberoi for the meme, calling it, "disgusting and classless." Director Madhur Bhandarkar also tweeted, "Dear @vivekoberoi, never expected such tweet from u. The trolls may go to any extent and make memes but u as a responsible celebrity should be careful of hurting anyone's dignity. Would request u to apologize and delete the tweet..."Talking about Sonam Kapoor's tweet, he said: "I personally feel that she should less overact in her films and should not overreact on social media."

"Sometimes people do such things to look cool. I want to ask Sonam how much she has worked on women empowerment," he said. The National Commission for Women (NCW) has issued a notice to actor Oberoi demanding explanation over his tweet on the exit polls.Rekha Sharma, NCW chairperson, said.

"We would like him (Vivek Oberoi) to apologise on social media and personally also to the person concerned. If he doesn't do so, we will see what legal action we can take against him. We will be talking to Twitter to remove that tweet immediately."Vijaya Rahatkar, Chief of Maharashtra State Commission for Women, said: "We have taken cognizance of actor Vivek Oberoi's tweet on exit polls and notice is being issued to him."