From iconic movie dialogues of 'Sholay' to 'Mr. India', this video has got some big WWE Superstars names with even bigger dialogues! 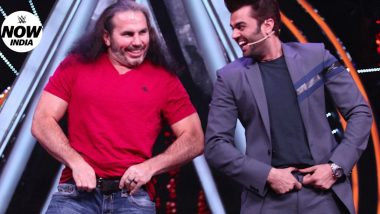 Mumbai, May 6: Bollywood has been winning hearts across the world for years not restricting itself to just its country of origin -- India. The iconic dances, dialogues and characters are world renowned, so much so that it's made its effects on the Superstars of the WWE Universe. From iconic movie dialogues of Sholay to Mr India, this video has got some big WWE Superstars names with even bigger dialogues! Luke Harper Asks For His WWE Release! Wrestlers React on Former 'The Wyatt Family' Member’s Shocking Request.

From WWE legends like Mark Henry, Kurt Angle and Matt Hardy, contemporary contenders like Seth Rollins, Roman Reigns, Ali and The New Day to the Wonder women of WWE Nikki Bella, Nia Jax, Lacey Evans and the Boss herself -- Stephanie McMahon -- Catch this latest compilation of WWE Superstars in their attempt to go Desi with WWE NOW's host Gaeylyn Mendonca.

(The above story first appeared on LatestLY on May 06, 2019 03:21 PM IST. For more news and updates on politics, world, sports, entertainment and lifestyle, log on to our website latestly.com).