Yash Chopra Birth Anniversary: Dharmputra, Ittefaq, Darr - 9 Socially-Relevant Films You Had No Clue Were Directed By The King Of Romance

Yash Chopra is still known as the king of romance because nobody makes the camera love the heroine of the film the way he does. But when he started, romance was just one of the subplots of his films and not a main premise. His socially relevant movies were not just fantastic but are still relevant. Here are nine of them. 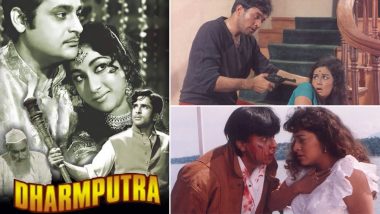 The moment we talk about Yash Chopra, we are reminded of lush fields where hero and heroine are romancing, or snow-capped Swiss Alps where heroes are swaying in overcoat and warmers while heroines are dancing in just chiffon sarees. If not that, you will be reminded of how he changed the course of Shah Rukh Khan's career with Darr. But what many might not know or often ignore is that, Yash Chopra's directorial career began with issue-based social dramas which reflected the society. It's pretty surprising to fathom that the man who reimagined romance in a big way in the 90s, is the same man who made movies like Dharmaputra, Dhool Ka Phool or others in the 60s. Aditya Chopra Launches Yash Chopra Saathi Initiative To Support Daily Wage Earners of Film Industry Amid COVID-19 Pandemic

So today, on Yash Chopra's birth anniversary, we will talk about the side of his filmmaking talent that is so less talked about.

This was Chopra's first movie as a director, produced by his brother B R Chopra. A film which a Muslim guy raising a Hindu child spread social and religious harmony. It also became one of the biggest hits of 1959.

This Yash Chopra movie resonates even today, it had released way back in 1961. Religious fundamentalism with Shashi Kapoor in the role of a hatemonger was supremely dealt with by Chopra.  18 Years of Saathiya: Did You Know Yash Chopra Locked Rani Mukerji’s Parents in His Office to Blackmail Her Into Doing the Film? (Watch Video)

A multi-starrer with the likes of Balraj Sahani, Sunil Dutt, Raaj Kumar, Shashi Kapoor, Sharmila Tagore, Nanda and so on, Waqt was the best of its waqt (Time). A lost and found plot popularised by Manmohan Desai, it had three brothers getting separated and then reunited. Even here he explores the issues in the society through the character arcs of each of the cast members.

A suspense thriller based on a Gujarati play, Ittefaq is a suspense thriller. Back in 1969, a film without a single song was unheard of and that too in a Chopra movie. But he went ahead and delivered a really gripping story with a fantastic execution. Do yourself a favour, leave the new and watch the old...you will be surprised!

Daag: A Poem Of Love

This movie had Rajesh Khanna, Sharmila Tagore and Rekha and addressed the plot of polygamy. Do we need to say more?

You know the beauty of this movie? It's a straight-up love triangle but deals with the damaged system of that time as well. Trust only Chopra to deliver a movie about romance laced with current issues.

There is something awe-inspiring about Mashaal. Although the premise isn't fresh, the way Chopra saw two ends of a spectrum for his characters is simply path-breaking. A man who wanted to end corruption became a party to it while a wily and bratty young man reformed to do good. What a wonderful movie!

We highly doubt Indian audience will ever be mature enough to love and respect Lamhe. This movie which showed a mature relationship was so ahead of its time that even in 2021, many don't find the plot palatable. This is the reason why Bollywood will always miss Yash Chopra terribly!

If you are surprised why we have Darr on the list, let us explain. In a decade where stalking was celebrated as a romantic gesture, Chopra told everyone that it wasn't. Shah Rukh Khan's maniacal character met his end for his deeds and was never glorified. That's why never try to defend Kabir Singh with Darr...One needs a lot of depth to understand the difference between the two. That's why Yash Chopra was a genius that nobody will ever match up to.

(The above story first appeared on LatestLY on Sep 27, 2021 08:10 AM IST. For more news and updates on politics, world, sports, entertainment and lifestyle, log on to our website latestly.com).