Zain Kapoor! What Does the Name of Shahid Kapoor-Mira Rajput's Son Mean?

Shahid had tweeted about naming his son so, as he wrote, "Zain Kapoor is here and we feel complete. Thank you for all the wishes and blessings. We are overjoyed and so grateful. Love to all." 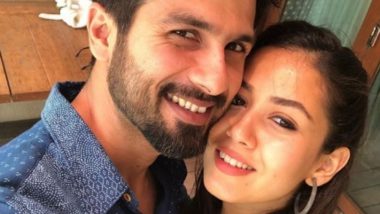 In an earlier interview to Zoom, Shahid Kapoor's wife Mira Rajput had said that when they have their next child, he or she won't be named as they did with their daughter, Misha. While Misha was Shahid's choice, merging letters of her first name with his, Mira revealed that their second child will be named by her. Now that they have a son, born on September 5 this year, people who expected that they would name him Shamir or Mishid would be disappointed to now that Mira has broken the trend. They have named their son - Zain Kapoor. Shahid Kapoor Makes the Big Announcement, Reveals His Son’s Name As Zain Kapoor.

Shahid had tweeted about naming his son so, as he wrote, "Zain Kapoor is here and we feel complete. Thank you for all the wishes and blessings. We are overjoyed and so grateful. Love to all."

Now why Zain? Well, as per the website, Oh! Baby Names, the Muslim-sounding Zain has three meanings, each in Arabic, Hebrew and English. The website states, "Zain and Zayn are transcriptions of the Arabic زين which means 'grace, beauty'. Zayin, Zain and Zayn are all transcriptions for the seventh letter of the Hebrew alphabet (as well as other Semitic languages such as Aramaic and Phoenician). The name Zain is an English baby name. In English, the meaning of the name Zain is: or John." Shahid Kapoor Is BACK on Twitter, Confirms His Account Was Hacked

As per Urban Dictionary, Zain also means "A great guy who has many secrets but is close to so many people. While he can be stubborn he is right most of the time and the world is not the same when he is not there. He is also a great person to be around and makes everything brighter. He is very funny and has a lot to say but always thinks before he speaks". Interesting!

So is this the reason why Shahid and Mira named their son Zain? Or we are reading too much and that someone in their family is a huge Zayn Malik fan.

(The above story first appeared on LatestLY on Sep 07, 2018 04:13 PM IST. For more news and updates on politics, world, sports, entertainment and lifestyle, log on to our website latestly.com).