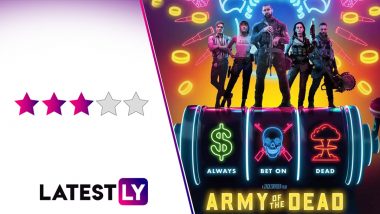 Army of the Dead Movie Review: After making his debut with the 2004 flick Dawn of the Dead, Zack Snyder returns to his roots with Army of The Dead. In his first non-comic book movie since he made 2013’s Man of Steel, we see Zack go back to take a turn at making the undead look cool in their gory violence. Army of The Dead does deliver on the grandiose and fun scale of action that Snyder’s films have come to known for, as he even interjects a lot of humour into the film. It’s surprisingly quite emotional as well by the end of it, but in between falters due to some of the misfires in its plot. Army Of The Dead: 5 Amazing Zombie Movies of the 21st Century to Check Out Before Zack Snyder’s Film on Netflix.

Snyder has his handprints all over the film. He wrote it, produced it and was even the director of the photography, so what you get here is 150 minutes of pure Snyder bash. He comes up with some really good and likeable characters especially with Dave Bautista’s Scott Ward and Matthias Schweighofer’s Ludwig Dieter. These two characters are the best from Army of the Dead and ones that you can easily root for.

Getting to know Scott’s history you understand what he has gone through, an ex-mercenary who is given a shot to capture gold and be set for life. Bautista plays him with some great range and gives one of his best performances. Ludwig Dieter at the other hand, is the comedic relief for the movie, a safecracker who is scared of zombies, nothing more to add there since he is immediately likeable the moment he appears on the screen.

The first few minutes of Army of the Dead again carry the tradition of Snyder crafting an excellent opening sequence with a great music choice to go along with it. The action in this film is shot beautifully as well, you get wide shots of the team just mowing down zombies with their guns, and some really impressive hand-to-hand fight sequences as well. Snyder also gives the zombies a lot of depth and does a lot of different things with them.

Of course you have your standard running zombies, along with that, there are ranks among zombies now. They follow one leader and creates this interesting dynamic because the zombies themselves have a lot of personality now. The zombies are quite well designed as well.

The cinematography, though, is a bit inconsistent, sometimes you have these really great wide and vibrant shots, and sometimes the shots are just obscured in blurs, like the camera just forgot to focus on that particular thing.

One of the biggest problems of the film is how it sacrifices characters for shock value, and it feels like a bit of a betrayal. Huma Qureshi's storyline, of a single mother trapped in the zombie-infested city, just felt shoe-horned in there. All it did was distract from the main plot of the film and felt like an inconvenience rather than a natural problem that the group has to face. Huma Qureshi Picks a Sexy Purple Dress For The E-Promotions of Army Of The Dead.

Also Army of the Dead is downright predictable in many instances and falls into the clichés that zombie movies have come to be known for.

- Depth given to the zombies

Army of The Dead does have its fair share of problems, but watching Dave Bautista run across casino tables while shooting zombies through the head didn’t get boring at all. It always managed to keep me entertained and at the end of the day was just pure popcorn fun. Army of The Dead is now streaming on Netflix.

(The above story first appeared on LatestLY on May 21, 2021 07:16 PM IST. For more news and updates on politics, world, sports, entertainment and lifestyle, log on to our website latestly.com).