Black Panther Wakanda Forever has a difficult task given the circumstances. It had to honor the legacy of late Chadwick Boseman and build upon the future of the Marvel Cinematic Universe (MCU). With details on the sequel being kept short, Ryan Coogler and cast members have still assured us that they are making something special for the fans. 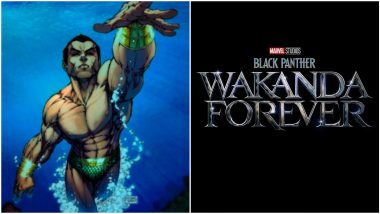 For a long time now fans have theorized that we might see the debut of Namor the Submariner and Marvel’s version of Atlantis in the Black Panther sequel. With a recent photo posted by a crew member on instagram, it looks like we might have a slight confirmation that we might see the character finally. You can check out the instagram post down below.

In the photo we can see that there is a huge diving tank with a camera rig near it. Diving tanks of these sizes are usually used to film massive underwater scenes. Given how Namor’s story is regulated to taking place in Atlantis, it doesn’t feel like that big of a stretch to think that we might see Namor. Eternals, Black Panther Wakanda Forever, Fantastic 4, The Marvels – Details of Every Marvel Phase 4 Film Revealed in the Sizzle Reel.

In Avengers: Endgame, Okoye even mentions that there are major Earthquakes taking place underwater, which could be a slight set up for Atlantis in the MCU. It is not just this one photo that has been the reason that people have been speculating about the debut of Namor. Ever since the rights to all the Mutants reverted back to Marvel, ever since then fans have speculated for him to appear.

In an exclusive scoop posted by the site The Illumminerdi, they had even mentioned and stated that the actor playing Namor had already been cast. He will be played by Tenoch Huerta and Black Panther Wakanda Forever will even feature a huge supporting cast for Atlantis. With this it seems certain that we might see this fan favorite character appear in the movie somehow. Black Panther Wakanda Forever is scheduled to release on July 8, 2022.

(The above story first appeared on LatestLY on Jul 29, 2021 06:14 PM IST. For more news and updates on politics, world, sports, entertainment and lifestyle, log on to our website latestly.com).