Blonde: Who is Marilyn Monroe's Real Father? Know the Truth Behind Mystery of One 'Charles Stanley Gifford'!

Marilyn Monroe's real father was revealed to be Charles Stanley Gifford after a DNA test. Having an affair with Marilyn's mom Gladys in the 20s, learn more about who he was. 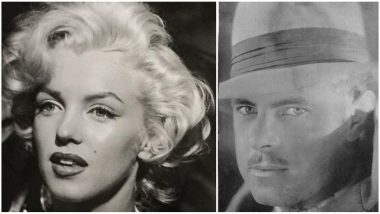 With the release of Blonde, we get a new Marilyn Monroe film that focuses on her tragic life and details her time becoming an actress. Quite exploitive and objectifying in its nature, Blonde focuses on a lot of abuse that was dealt by Marilyn and throws a mystery towards her that at times was wildly inaccurate. Blonde Movie Review: Ana de Armas’ Hellish Turn as Marilyn Monroe Can’t Carry This Objectifying and Exploitive Psychodrama (LatestLY Exclusive).

Based on the 1999 Joyce Carol Oates novel of the same name, the movie starts off detailing her traumatic and abusive past as her mother tries drowning Marilyn in a bathtub. Being hinted throughout the film that her father is a big-wig in Hollywood, the movie never truly delves into her past, and even when it does, inaccuracy reigns supreme for a dramatic effect. So, to set the record straight, here we are as we uncover the mystery behind one “Charles Stanley Gifford,” and explore the true parentage of Marilyn Monroe.

Who Was Marilyn Monroe’s Real Father?

As spoken before, the movie opens up with quite the inaccurate depiction of Monroe’s relationship with her mother Gladys Baker. While Marilyn did have a complicated relationship with her mother, it never was like the way it was depicted as in the film. As a matter of fact, Monroe was put into foster care when she was just two weeks old. She even tried getting full custody of Monroe, but due to her mental health issues Gladys was never really successful.

While the movie depicts Gladys telling Monroe that her father was always a huge movie star, that exactly wasn’t the case. Marilyn would always list Gladys' second husband's name, Edward Mortensen, as her father in documents, but that was due to her not knowing the truth. The parentage behind Marilyn Monroe has always been a mystery, and the theory of Charles Stanley Grifford did pop up, but it was never proved, until now.

In recognition of Father’s Day, This is a photo of Charles Stanley Gifford, Marilyn Monroe’s father. #marilynmonroe #happyfathersday #fathersday pic.twitter.com/nAulTB0fsJ

When a DNA test was done taking a strand of Monroe’s hair and comparing it with one of Gifford’s children, it would be confirmed that he indeed was her father. Proving a theory that has been building up for decades, this was quite the development

Gladys would have a small affair with Gifford when he was working at Consolidated Films as salesman for motion pictures. He would also become the owner of Red Rock Dairy in the 1960s and sell bakery and ice cream which you got to say, is a pretty good endeavour.

57 years after the death of Marilyn Monroe's father, Charles Stanley Gifford. Marilyn tried to meet her father several times in her life, but he kept refusing.#MarilynMonroe pic.twitter.com/EKRdYX4dXA

According to Charles Casillo’s book Marilyn Monroe: The Private Life of a Public Icon, Monroe was able to track down Charles when she was on a search for her father, but the initial meeting never really went smooth. Saying that to call his lawyer as he has a family and can’t say anything to Monroe, the conversation was cut short over there. Blonde: Ana De Armas' Marilyn Monroe Biopic at Netflix Set For 2022 Release.

It’s a bit weird seeing how Blonde wouldn’t really touch upon this considering it does cover Marilyn’s life, but then again, what to expect from a tale that’s ridden with inaccuracies. However, its still a bit good to know the truth considering there at least is some closure there.

(The above story first appeared on LatestLY on Sep 29, 2022 02:53 PM IST. For more news and updates on politics, world, sports, entertainment and lifestyle, log on to our website latestly.com).