Yes, you read it right. After being the God of Thunder, Chris Hemsworth is all set to play WWE Legend Hulk Hogan in his biopic for Netflix. 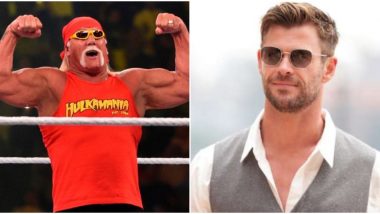 While his recent outing with Netflix, Extraction has just come online, Chris Hemsworth is already looking forward to playing Hulk Hogan in his biopic for the OTT platform. Yes, the Thor actor will step into the shoes of this WWE legend and the excitement for the same is already sky-high. And while the news is too good to digest, there's another exciting factor that would make your entire experience a bit more delicious (well, for your ears). Joker director Todd Phillips has been roped in to direct this biopic and after watching his last directorial, you can assume the project to be in safe hands. Extraction Movie Review: Chris Hemsworth and Randeep Hooda Trade Blows in Netflix’s Partly Solid, Mostly Predictable Action Thriller.

Speaking about his new project, Hemsworth in his new interaction with Screen Rant said, "I haven't read a script yet. I know it's being written now and worked on. I know very little about that. It's sort of in the process now. I'm just fascinated by that world, and I think they're pretty keen to show a side of the world that people haven't seen before. I'm as intrigued as you are." Limitless: Chris Hemsworth to Lead Nat Geo's Docu-Series.

The director is in fact super excited for his next project and thinks the role could earn Hemsworth an Oscar nod. "We had a meeting and [Phillips] goes, 'I really think this could be a huge movie and Chris Hemsworth is a huge fan," Hulk Hogan had previously said. A biopic on Hogan's life already sounds like a promising idea and Phillips' direction and Hemsworth's addition is only going to make it brilliant. Don't know about you folks but we are definitely looking forward to it.

(The above story first appeared on LatestLY on Apr 25, 2020 12:19 AM IST. For more news and updates on politics, world, sports, entertainment and lifestyle, log on to our website latestly.com).