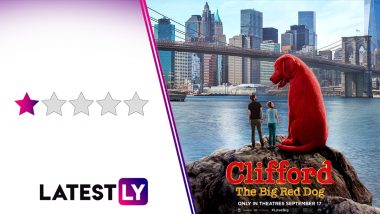 Clifford the Big Red Dog Movie Review: Hollywood now for a while has had an obsession with taking classic animated films and turning them into live-action features. Disney has been doing this with varying degrees of success. However, not all films had hit the bull's eye. The most recent example of the latter case we have is Clifford the Big Red Dog and oh, it is a film with hardly any soul to it! Clifford The Big Red Dog Trailer: World’s Largest Puppy Turns From a Total Chaos Into a Saviour! (Watch Video).

Clifford the Big Red Dog follows Emily, a 12-year-old-girl who is spending the weekend with her Uncle Casey because her mom has some work outstation. Together they stumble upon a red dog who they name Clifford and he suddenly grows up to 10 feet in the span of a night. The film is based on a children book series of the same name.

Well, talking about what’s good with Clifford the Big Red Dog, there isn’t much. The film definitely does try to be funny, and I think it does a decent job at that. Through and through, it feels like a film that children will have a great time watching and that was my biggest takeaway from it.

That said, Clifford the Big Red Dog is a clichéd film through and through. I felt that I had already seen this plot a million times before in other films. A child down on her luck finds something magical, so she and her up to no good companion go on an adventure all the while an evil corporation of some sort is behind them. I have seen this already, it just left me so bored and just wishing when it would end.

The characters are also not very likeable. In a cast of not that many well-known actors, I think Jack Whitehall was somewhat entertaining to watch when he was on screen, but other than him everyone else was just painful to watch. Even Tony Hale is in this, who is playing the villain who wants to steal away Clifford so that he can experiment on him for his Lyfegro products, and I couldn’t care less for that character. He was the same moustache twirling villain that I have seen before in children’s films and I get that over here again.

Clifford the Big Red Dog also doesn’t seem to have any visual flair. Just recently this year I saw Tom & Jerry which also takes place in New York, and both these films just look identical. I swear you could put on either of them on TV and it would be difficult to tell which one is going on. The Power of the Dog Movie Review: Benedict Cumberbatch's Netflix Film is a Stellar Psychodrama Set in the Western Era! (LatestLY Exclusive).

Coming to the elephant in the house now of course, how does Clifford look ? Well it’s a bit rough. There is a certain uncanny valley to it where you definitely feel like you’re watching actors react to a tennis ball. The dog itself is one of the worst animated creatures I have seen in a while. There is no sense of weight to him. Even when Clifford is a puppy, he looks unnatural. The red just makes it such a sore on the eyes too where the dog just doesn’t look cute, rather feels like a character ripped out straight from an early ‘2000s horror film.

Clifford the Big Red Dog is perhaps one of the worst films I have seen this year. There is no redeeming quality to it and it just feels like a soulless studio film from start to finish. It’s one of the best examples of just why some things should not be translated to live-action and be left untouched.

(The above story first appeared on LatestLY on Dec 03, 2021 05:32 PM IST. For more news and updates on politics, world, sports, entertainment and lifestyle, log on to our website latestly.com).