Elon Musk on Johnny Depp vs Amber Heard Defamation Trial: I Hope They Both Move On

Depp and Heard split in May 2016, when Heard filed for divorce and then sought a domestic violence restraining order against him. Depp denied her abuse claims, and the former couple settled their divorce out of court in August 2016. 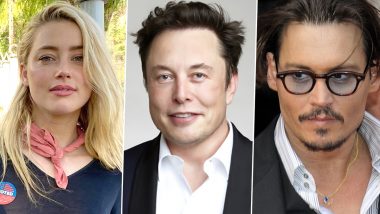 Musk, 50, later responded to the tweet writing: "I hope they both move on." "At their best, they are each incredible," he added. Heard, 36, and Musk were first linked together in 2016. The two broke up in August 2017 due to their busy schedules but rekindled their romance in January 2018, only to split for a second time a month later.

During the trial, Depp, 58, had accused the Aquaman actress of beginning a romantic relationship with Musk "no later than one month after" she and Depp married in 2015. In the lawsuit obtained by People, Depp claimed Heard received "late night" visits from billionaire businessman Musk at the LA penthouse Depp and Heard shared while Depp was out of the country.

Depp went on to claim that Musk was granted access to his home the same night Heard "presented her battered face to the public". His lawsuit alleges Heard's domestic violence allegations against Depp were false and "an elaborate hoax." A representative for Musk maintained that "Elon and Amber didn't start seeing each other until May 2016, and even then it was infrequent. Their relationship didn't become romantic until some time later". Amber Heard Reveals She Never Loved Elon Musk; Dated Him for ‘Filling Space’ After Johnny Depp Split.

Depp and Heard split in May 2016, when Heard filed for divorce and then sought a domestic violence restraining order against him. Depp denied her abuse claims, and the former couple settled their divorce out of court in August 2016.

On Friday, the exes' respective attorneys presented their final remarks in the ongoing trial in Fairfax, Virginia, summarizing much of the allegations on either side thus far since proceedings began on April 11. "You either believe all of it, or none of it," Depp's attorney, Camille Vasquez, said of Heard's allegations of abuse against Depp. "Either she's a victim of truly horrific abuse or she's a woman who's willing to say absolutely anything."

She also accused Heard of "profound cruelty", and of coming "into this courtroom prepared to give the performance of her life, and she gave it". In part, during his own closing remarks, Heard's attorney Ben Rottenborn said, "if he abused her one time, Amber wins", and accused Depp of having "almost all of" his witnesses on his payroll. "Let's see the monster. Let's see the monster in the flesh," Rottenborn added, before playing the video of Depp slamming cabinets in the former couple's kitchen.

(The above story first appeared on LatestLY on May 29, 2022 05:31 PM IST. For more news and updates on politics, world, sports, entertainment and lifestyle, log on to our website latestly.com).