JK Rowling Comes Out As Sexual Assault Survivor, Says ‘I Couldn’t Shut Out Those Memories’

Get latest articles and stories on Entertenment at LatestLY. "Harry Potter" author JK Rowling has revealed she is a survivor of domestic violence and sexual assault in a lengthy and personal essay, in response to the outrage on her comments on transgender people. 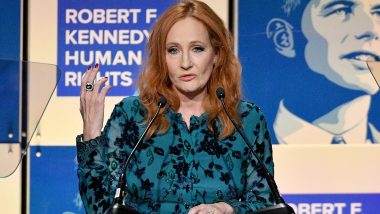 Harry Potter author JK Rowling has revealed she is a survivor of domestic violence and sexual assault in a lengthy and personal essay, in response to the outrage on her comments on transgender people. The writer explained her decision to come out as a survivor who was subjected to violence and abuse in her 20s, saying "I'm mentioning these things now not in an attempt to garner sympathy, but out of solidarity with the huge numbers of women who have histories like mine, who've been slurred as bigots for having concerns around single-sex spaces". Last week, the 54-year-old writer drew outrage on Twitter when she criticised an opinion piece that used the phrase "people who menstruate" and posited that discussion of gender identity invalidates biological sex. In her tweets, Rowling had said if sex isn't real, there's no same-sex attraction. Harry Potter Author JK Rowling Faces Backlash For Her Insensitive and Offensive Tweet on Transgender People.

"If sex isn't real, the lived reality of women globally is erased. I know and love trans people, but erasing the concept of sex removes the ability of many to meaningfully discuss their lives. It isn't hate to speak the truth," she wrote.

"The idea that women like me, who've been empathetic to trans people for decades, feeling kinship because they're vulnerable in the same way as women — ie, to male violence — 'hate' trans people because they think sex is real and has lived consequences — is a nonsense," she further said.

Her tweets drew criticism from the LGBTQ community, "Harry Potter" star Daniel Radcliffe and others who were upset with her comments on social media, with many fans expressing disappointment that the author had tarnished their love for her books. JK Rowling Claims She Has Fully Recovered From COVID-19 Symptoms Without Getting Tested, Took ‘Doctor’ Husband’s Advice.

On her official website, the British author expounded on her views on Wednesday what she meant by her initial tweets regarding sex and gender of women, and how identifying sex as a real thing is important.

She recalled that when she read about the theory of gender identity in her youth she felt "mentally sexless", adding if she had been born 30 years later she too "might have tried to transition". "The allure of escaping womanhood would have been huge. I struggled with severe OCD as a teenager. If I'd found community and sympathy online that I couldn't find in my immediate environment, I believe I could have been persuaded to turn myself into the son my father had openly said he'd have preferred," the writer said.

Rowling said if someone could read her mind, they would understand that when she reads about a trans woman dying at the hands of a violent man, she stands in "solidarity and kinship" with them. "I have a visceral sense of the terror in which those trans women will have spent their last seconds on earth, because I too have known moments of blind fear when I realised that the only thing keeping me alive was the shaky self-restraint of my attacker."

She said while she believes trans people need and deserve protection, she doesn't want to make natal girls and women "less safe".

Accusing her critics of "groupthink" and "relentless attacks", the writer said, "When you throw open the doors of bathrooms and changing rooms to any man who believes or feels he's a woman – and, as I've said, gender confirmation certificates may now be granted without any need for surgery or hormones – then you open the door to any and all men who wish to come inside. That is the simple truth." In a reference to an unnamed poll, Rowling claimed that those who did not support preserving single-sex spaces were "only those privileged or lucky enough never to have come up against male violence or sexual assault, and who've never troubled to educate themselves on how prevalent it is".

After receiving the backlash for her remarks she was "in a very dark place inside my head, as memories of a serious sexual assault I suffered in my twenties recurred on a loop". "That assault happened at a time and in a space where I was vulnerable, and a man capitalised on an opportunity. I couldn't shut out those memories and I was finding it hard to contain my anger and disappointment about the way I believe my government is playing fast and loose with women and girls' safety."

Rowling said she had initially been moved to share her thoughts after reading about proposed "gender confirmation certificates" in Scotland, which will allow trans people to change sex on their birth certificates based on how they identify, not medical and psychiatric reports. "I've read all the arguments about femaleness not residing in the sexed body, and the assertions that biological womens don't have common experiences, and I find them, too, deeply misogynistic and regressive.

"It's also clear that one of the objectives of denying the importance of sex is to erode what some seem to see as the cruelly segregationist idea of women having their own biological realities or – just as threatening – unifying realities that make them a cohesive political class. The hundreds of emails I've received in the last few days prove this erosion concerns many others just as much. It isn't enough for women to be trans allies. Women must accept and admit that there is no material difference between trans women and themselves," she said.