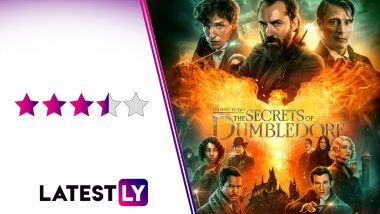 Director David Yates returns to direct his seventh Wizarding World film here as writer JK Rowling teams up with Steve Kloves to write the screenplay. Fantastic Beasts: The Secrets of Dumbledore sees Dumbledore (Jude Law) gather a team of his own to make a move on Grindelwald (Mads Mikkelsen) before he can call a war on the Muggle world.

Now the entire production of Fantastic Beasts: The Secrets of Dumbledore was marred in a lot of controversies due to some of JK Rowling’s comments and how Ezra Miller has presented themselves over the last few days. But, the original bit began after Johnny Depp was booted off the project and Mads Mikkelsen was brought in to replace him. Quite the move by the studio here, but one that pays off as Mikkelsen truly shines in the role of Grindelwald. He gives a better and more nuanced performance than Depp as his love for Dumbledore is quite well realised from the first scene they share together.

Talking about Dumbledore, Newt Scamander (Eddie Redmayne) is still present here, but in terms of plot importance takes a backseat as this is Albus’ story through and throughout. Albus perhaps alongside Grindelwald gets the most development here, and I liked the progression of his character. Not to mention, Law portrays a young Albus Dumbledore perfectly and I can’t wait to see where his character goes from here with the way he was set up. Also, it was nice to see that they acknowledge many times that Albus was in love with Grindelwald, and their relationship not being just tiptoed around.

The team that Albus puts together is quite diverse and charming in their own way. Of course you have Eddie Redmayne doing what he does best as Newt Scamander, but surprisingly Lally Hicks portrayed by Jessica Williams was my favourite of the bunch. Dan Fogler continues to be as loving and sweet in the role of Jacob Kowalski.

Now talking about the plot, the last film was heavily criticised for not doing anything until the finale. Rather it felt like a trailer for this movie, and over here it feels like it’s setting up something too, but that set up here is just maintained for the first half, and the second half really delivers on it. Although I will say I am a bit disappointed that you don’t get much of the magical wand action here, since so much of the story feels like us delving into the politics of the Wizarding World.

With Grindelwald basically being Magical Hitler, it sort of leads into that territory of politics as we inch closer to World War II in this timeline. It also runs into some many familiar old tropes that can make things feel a bit formulaic as you have seen these things done in a better way in other franchises before.

Although luckily, the story is able to spare many charming moments throughout. One scene in particular concerning Albus and Credence (Ezra Miller) was done beautifully. Also another scene teased in the trailers sees Newt and his brother Theseus (Callum Turner) swiveling through the cave carefully so as to not be ravaged by a huge scorpion-like monster.

It also helps in delivering a second half that’s emotionally impactful within the movie's themes and really shows us the different sides of the world. From a world building point, it does a great job in presenting the German and Chinese wizarding cultures, and I liked seeing that. Fantastic Beasts The Secrets of Dumbledore Review: Critics Have Mixed Reactions to Eddie Redmayne, Jude Law's Film.

The fantastic beasts in Fantastic Beasts look mighty magical as well. Like usual, the design of these creatures are very well done again, although some of the visuals at times left a bit to be desired.

Poor VFX in Some Scenes

Fantastic Beasts: The Secrets of Dumbledore is a massive improvement over the previous outing but still needs to refine its edges in many spots. As we kick into the second half of this film series, Yates and team do a good enough job of setting a fourth film, but do it while telling a good contained story that can stand on its own. Fantastic Beasts: The Secrets of Dumbledore is playing in theatres now.

(The above story first appeared on LatestLY on Apr 08, 2022 09:50 AM IST. For more news and updates on politics, world, sports, entertainment and lifestyle, log on to our website latestly.com).