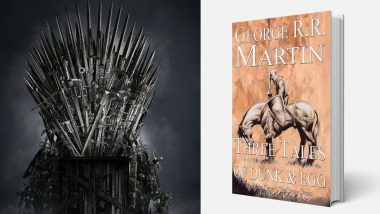 Winter isn't over yet! Fans of the famous HBO series Game of Thrones have a reason to rejoice as a prequel of the show is in early development. A series adaptation of Tales of Dunk and Egg, written by author George R. R. Martin, a prequel to the events of Game of Thrones, is in early development at HBO, reported Variety. The sixty-minute long show would be based on the series of fantasy novellas by R. R. Martin. Olivia Cooke Reveals She Didn’t Watch Game Of Thrones Until She Landed a Role in Its Prequel House Of The Dragon

It will focus on the adventures of two 'Game of Thrones' characters- Ser Duncan the Tall (Dunk) and a young Aegon V Targaryen (Egg) 90 years prior to the events of 'A Song of Ice and Fire'. Martin has published three novellas in the 'Tales of Dunk and Egg' series to date: 'The Hedge Knight' in 1998, 'The Sworn Sword' in 2003, and 'The Mystery Knight' in 2010. These three were then published together as a collective novel titled 'A Knight of the Seven Kingdoms' in 2015. Game Of Thrones Star Sophie Turner Urges People to Wear Face Masks Amid COVID-19 Pandemic

None of the artists are currently connected to the project, however, sources state that HBO has been considering it as one of its most anticipating projects to work on after the success of 'Game of Thrones'. This would be the second 'GOT' prequel to release if it gets the green signal. HBO is currently working on the series 'House of the Dragon', which is slated to release in 2022. It will revolve around the buildup to the Targaryen civil war in Westeros that is known as the Dance of Dragons. Another GOT prequel written by Jane Goldman and starring actor Naomi Watts went to pilot at HBO but was scrapped in 2019.