How to Train Your Dragon: The Hidden World Trailer 2 – Toothless Gets a Girlfriend in the New Animated Comedy - Watch Video

The movie, third in the series, is all set to release in February 2019. 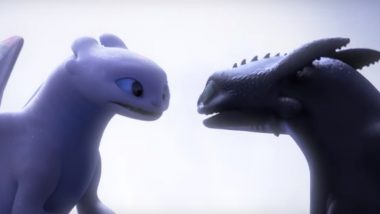 The second trailer of the upcoming animated comedy How to Train Your Dragon: The Hidden World has been released. The movie, third in the series, is all set to release in February 2019. That is a long wait from now, but the new trailer makes it seem worth it. We meet Hiccup, all grown up, in the trailer, and his bond with his Night Fury dragon Toothless only strengthened. But now, their bond as friends might get tested as Toothless finds a girlfriend.

We get to see a whole new 'hidden world' of dragons. Which also seems to be the home of a female Light Fury dragon whom Toothless develops a fancy for. Now, that is going to be interesting to watch. Our favourite dragon all grown up. How to Train Your Dragon: The Hidden World Trailer – Toothless Trying to Woo a Female Dragon Is One of the Best Scenes in This Animated Fantasy Drama.

“We thought about it for a long time and came up with what we think is a bittersweet way to say goodbye to these characters, but the right way,” DeBlois told EW, talking about the end of the franchise.

(The above story first appeared on LatestLY on Oct 26, 2018 11:09 AM IST. For more news and updates on politics, world, sports, entertainment and lifestyle, log on to our website latestly.com).