Hollywood star Matthew McConaughey took to Instagram to inform fans that he would engage in a conversation with Sadhguru. The interview goes live on Wednesday, on YouTube. 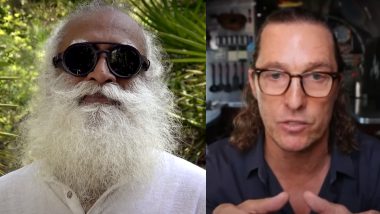 Hollywood star Matthew McConaughey took to Instagram to inform fans that he would engage in a conversation with Sadhguru. The interview goes live on Wednesday, on YouTube. The Oscar-winning actor's discussion with the spiritual guru pertains to Karma, crafting one's destiny, the connection between yoga and religion, and exploring the unknown. Will Smith and Family Meet Sadhguru; Hollywood Star’s Candid Pics with the Spiritual Guru Are Unmissable.

The official description of the video on YouTube reads: "Academy Award-winning actor @Matthew McConaughey asks Sadhguru about Karma, crafting one's destiny, the connection between yoga and religion, and exploring the unknown. Sadhguru offers insights on how we should not confuse our lifestyle -- a consequence of the times we live in -- with life, the real thing!" Watch The Office’s Rainn Wilson and Sadhguru Talk About Humour and Environment in This Enlightening Video.

The actor's recently-released book "Greenlights", too, speaks about the discovery of life. "Recently, I worked up the courage to sit down with those diaries. I found stories I experienced, lessons I learned and forgot, poems, prayers, prescriptions, beliefs about what matters, some great photographs, and a whole bunch of bumper stickers," McConaughey said on the official website of his novel.

"I found a reliable theme, an approach to living that gave me more satisfaction, at the time, and still: If you know how, and when, to deal with life's challenges—how to get relative with the inevitable -- you can enjoy a state of success I call catching greenlights," he added. Describing it as a "love letter to life", he added: "Hopefully, it's medicine that tastes good, a couple of aspirin instead of the infirmary, a spaceship to Mars without needing your pilot's license, going to church without having to be born again, and laughing through the tears. It's a love letter. To life."

(The above story first appeared on LatestLY on Jun 02, 2021 06:44 PM IST. For more news and updates on politics, world, sports, entertainment and lifestyle, log on to our website latestly.com).